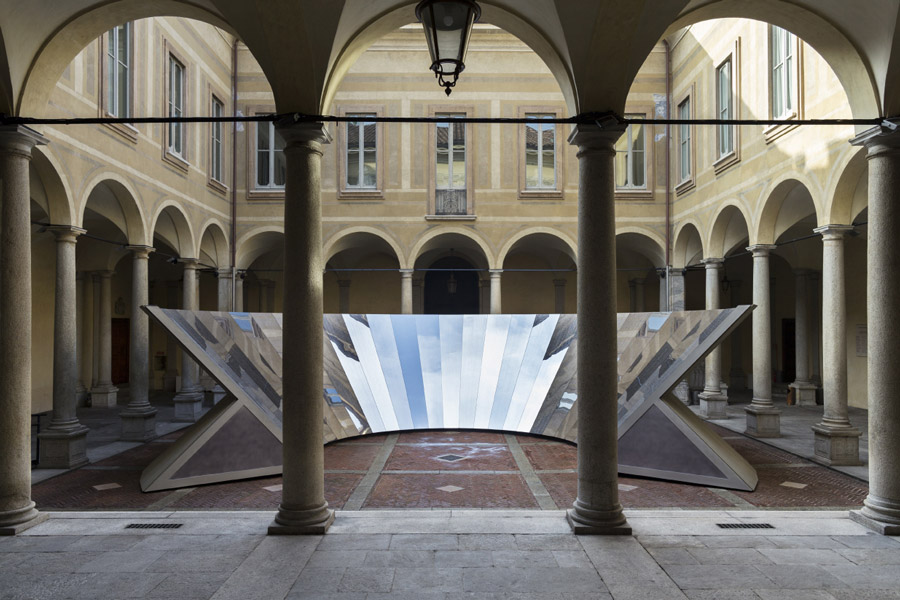 Whether you know it or not, Cos – H&M’s serious but considered sister brand – has changed the way we think about design and fashion. It’s been a quiet revolution in an industry known for bold moves, big shows and international extravaganzas. Instead of courting celebrities and wrangling influencers, the London-based brand has chosen a furniture fair – Milan’s Salone del Mobile (April 9-14) – as its spiritual home.

“The first time we went to Salone, we didn’t even have a store,” says Karin Gustafsson, the brand’s creative director. “We went as a team for inspiration and we really resonated with this multidisciplinary happening.” Eight years on, and they are due to host the latest – and possibly most ambitious – “happening” yet: a monumental, 3D-printed pyramid pavilion by award-winning architect Arthur Mamou-Mani.

For anyone outside of the design world, Salone del Mobile probably doesn’t register. It isn’t like fashion week or the Met Gala, which garner endless amounts of media coverage – but the international design event has an exceptionally broad reach. “It is so much more than a design fair,” says Gustafsson, “it’s about creatives coming together, showing their work, sharing ideas and their missions.” No surprise then that fashion and tech brands – from Loewe to Google – all pitch up at the week-long celebration of creativity and craftsmanship. These exhibitions and installations are a statement of intent and identity, which feeds into their products and therefore, our everyday lives.

Over the past seven years, Cos has consistently raised the bar at Salone with its clever and creative collaborations. Not only has Gustafsson enlisted the most brilliant array of talent – from London-based set designer Gary Card to Japanese design studio Nendo and New York’s Snarkitecture – but the installations themselves have each conveyed deep meaning though thoughtful (and gleefully insta-friendly) displays. Japanese architect Sou Fujimoto’s Forest of Light in 2016 translated the feeling of Cos’s fabrics into an experience using only lights and mirrors. Studio Swine’s mesmerising New Spring multi-sensory installation in 2017 featured a tree-like sculpture that blossomed with mist-filled bubbles that could be caught by spectators wearing special gloves – simultaneously evoking the ephemeral nature of seasons and the lightness of Cos’s collection.

“It’s all about our DNA and who we are as a brand,” offers Gustafsson as an explanation behind her Salone success. We tend to look to nature, what inspired us this season, and what the future holds.” The SS19 moodboards sit close by as she speaks; Arthur Mamou-Mani’s Burning Man temple Galaxia stands out.

“On the moodboard, the art may be taken at face value – for the geometry and its beauty,” says Mamou-Mani, “but once we started talking, it was clear that we shared deeper links.” Both creatives express a clear interest in craftsmanship, timelessness, quality; in creating something in a different way; in new materials and the future of design. Lofty subjects that, in classic Cos style, have been distilled into a light, optimistic collection and a digitally-designed installation titled Conifera, housed in Milan’s Palazzo Isimbardi. It’s the second time the 16th century palazzo has played host to Cos, following last year’s runaway success with “Open Sky” – a mirrored sculpture by American artist Phillip K Smith.

Cofinera is a lesson in monumentality and lightness, and the contrast between the two. More than 700 individually printed building blocks, or bio-bricks, have been stacked to create mesmerising arches, mesh lattice walls and sculptural spaces. Made from PLA – “a bioplastic made from corn, essentially,” explains Mamou-Mani – and douglas fir, the bricks are recyclable and compostable.

“They are very sturdy components,” says the London-based architect. “They have the same lightness-to-structure ratio as foam, so they are very airy and light, but can hold a big weight.” It took a network of 3D printers in Venice, Milan, Maccerata and London to achieve the ambitious scale of the project.

“I think part of the joy is the subtle differences in these self-similar elements,” explains Mamou-Mani. “You’ll look at one component and it will have a slight tweak to the next one, and the next one. You could look at the piece and have and immediate impression, but you can also spend time with it and uncover more layers.”

New this year is the learning opportunity: a conscious decision to illustrate the process behind the vision with the inclusion of a live 3D printer at the heart of the historic palazzo. Following their week-long residency at Salone, some of the bio-bricks will take over Cos’s London store-cum-gallery in Coal Drops Yard, reconfigured into a different structure, but keeping the same spirit. Others will be transformed into playful furniture pieces by the architecture practice.
“This project unifies everything I think is important: the use of material; the technology that is going to change architecture; the circular aspect of this approach; the modular concept, which can be disassembled and reused elsewhere; combustibility; awareness of material; and awareness of what we produce and create,” says Mamou-Mani. Gustafferson agrees: “It’s about innovation and craft, but also light and positive thinking.”
Source: vogue.com