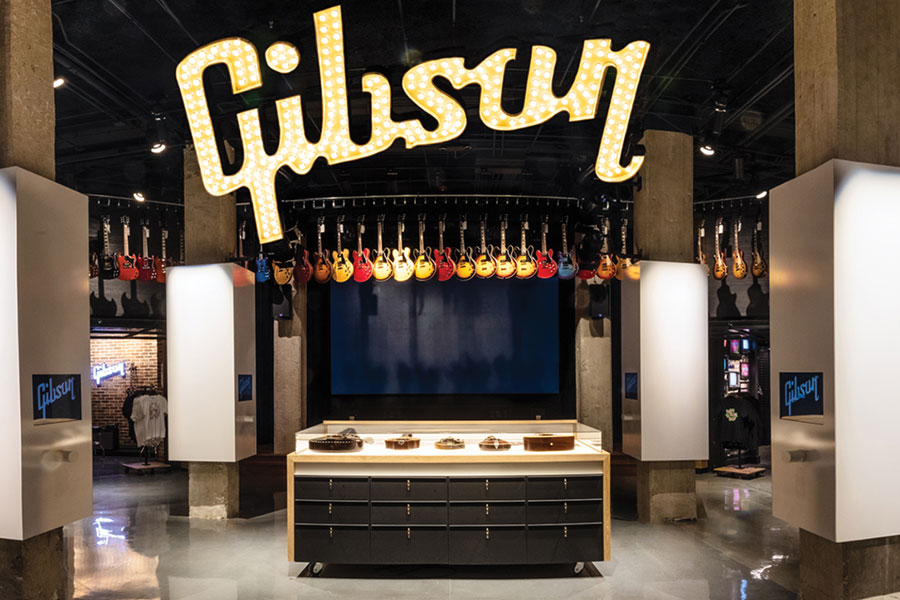 GUITAR-CENTRIC GARAGE bands have long been an integral part of the global music scene. So it’s fitting that Gibson, one of the major players in the guitar market, would open a superstore in its hometown of Nashville – aka “the Music City” – based on that motif.

Among the high-profile rockers who have strapped on a Gibson product are Led Zeppelin’s Jimmy Page, Grateful Dead’s Jerry Garcia, The Who’s Pete Townshend and ZZ Top’s Bill Gibbons. Looking to build on that heritage, the Gibson Garage reflects a push led by President and CEO James Curleigh to shift the 119-year-old company into what he describes as a “start-up mode, with a clear focus on leveraging the [brand’s] iconic past and leaning into an innovative future.” (Founded by Orville Gibson in Kalamazoo, Mich., the company opened a factory in Nashville in 1974 and eventually moved its headquarters there.)

Intended to be a “fan journey experience,” Gibson Garage is the storied guitar brand’s latest concept that opened recently in its hometown of Nashville, Tenn.

Overseeing the creation of the Gibson Garage was the brand’s in-house design team, led by Director of Brand Experience Mark Agnesi; the local offices of G7, project management, and GPJ, creative direction/design experience; and Shoptology, retail strategy. The space that team worked on is on the ground floor of a massive, reinforced concrete warehouse that was the largest building of its kind when it opened in 1906. The new store consolidates what were four storefronts into an 8000-square-foot “fan journey experience” for four distinct types of customers: beginners, music enthusiasts, repairs and aficionados.

Dedicated areas, like this one for Mesa Boogie (shown), provide Gibson an opportunity to showcase affiliated brands.

“The design theme of the Garage completely eschews the typical trappings of a common guitar store, where the walls are typically wallpapered slatwall with numerous hanging guitars, and every square inch of display space is devoted to selling anything and everything a customer may or may not need,” says Paul Hemsworth, GPJ’s VP and Executive Creative Director. “The result is usually confusion and chaos. The Garage, by contrast, presents its merchandise in a much more curated and fan-friendly manner.”

That vibe starts at the front entrance, where patrons encounter an overhead light fixture configured as the Gibson logo and a front-and-center display case that holds a quartet of rare instruments of the brand, such as a mandolin that was one of the earliest creations of founder Orville Gibson. Immediately surrounding this central case is a selling space offering branded apparel and merchandise.

Behind that is a small, 40-seat stage area where mini concerts are held. Flanking the live-performance area on the right are shop-in-shops for Gibson and its affiliated brands – the Gibson Les Paul, Epiphone and Kramer guitar lines, Mesa Boogie amplifiers and KRK studio monitors – along with a repair shop. In addition, to the immediate right of the entrance is a custom shop where customers can create their own “axe” by choosing the specific piece of maple wood for its body top and its paint finish, as well as the desired neck profile, hardware and electronics.

Meantime, left of the entrance is a room dedicated to Gibson’s acoustic guitars. Behind that is a walled off “entertainment relations” zone for artists performing on the store’s in-house stage and other VIPs that includes a kitchen and private bathroom/shower.

In keeping with the garage theme, several of the brand zones feature closable overhead sliding doors. In addition, each zone has a distinct feel created in large part by its materials palette. The walls of the acoustic room, for example, uses the same wood species Gibson uses for the soundboards of such guitars, while the custom shop has mahogany and rosewood display fixtures, which are the same materials Gibson uses for its solid-body electric guitars.

Uniting it all is a moving overhead conveyor belt with nearly 200 guitars hanging from it. “The conveyor adds visual energy to the space, and also serves as a memorable method for displaying the huge variety of guitars for sale there,” says Hemsworth.

Like a free-form riff on a lead guitar, the store contains several sly surprises. For example, a wall that looks to be made of small bricks is, on closer inspection, made of ’70s-era cassette tapes, while in the VIP space, a vault containing ultra-rare Gibson guitars is sequestered behind a door that’s disguised as a bookcase. Rock on, indeed.