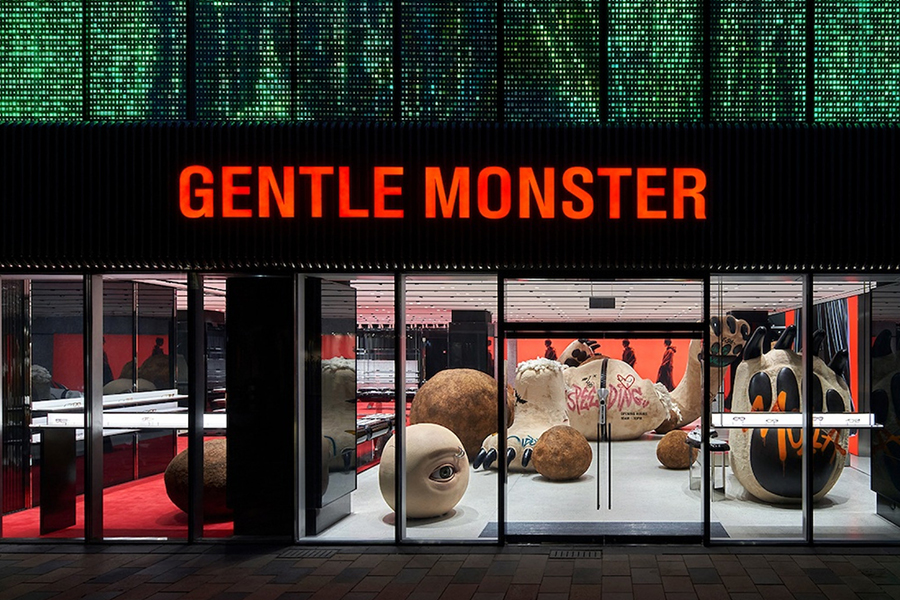 With an interior that visualizes our future relationship with data, Gentle Monster’s newest Beijing store is its largest flagship to date.

Swapping its address in shopping centre Taikoo Li Sanlitun’s North District for a larger location in the South, Gentle Monster now occupies a key commercial site. Surpassing 1,330 sq-m, the new flagship carries forward the eyewear brand’s iconic narrative-retail torch, this time posing a scene in which one enters our ‘fractured world’ of tomorrow. The eye-catching, green-lit exterior calls to mind The Matrix, with Gentle Monster’s large logo signage in bright red. Inside, the surrealistic elements are framed as objects that have ‘fallen out of the digital world, repositioned according to the order of the real world’, as the brand’s in-house design team explains.

As with the brand’s other physical outposts, multimedia content and installations play a big part in the design. A multi-scale display of geometric spheres encouraging free movement is distributed over the first floor. On the second storey plays a video produced by London- and Berlin-based artist Jonas Lindström, to a backdrop of rhino statues, giant robots and the Probe, a bespoke sculpture by Gentle Monster. Larger-than-life insect installations punctuate the final third level, which displays eyewear in black-and-glass tables. Bright red carpeting, chrome detailing and glossy black finishes adorn the total interior.

We’ve covered Gentle Monster stores frequently over the years, largely for the reason that the brand was a frontrunner in experiential-retail design as we know it today. Not one space is alike – no matter the size – and there’s always a fantastical story behind the design. How will that vision translate in a market where more and more retailers are catching on? Will Gentle Monster be able to continue differentiating itself? It’s given little reason to make us doubt that, but even tried-and true formulas are up for reconsideration from time to time. Nonetheless, the sensational effect of Gentle Monster’s new stamp on Taikoo Li Sanlitun is as powerful as ever.

The Future is Electric: What retailers need to know about adding EV charging stations

How Can Alcohol Brands Bolster Customer Loyalty? Look To This Australian Gin Experience