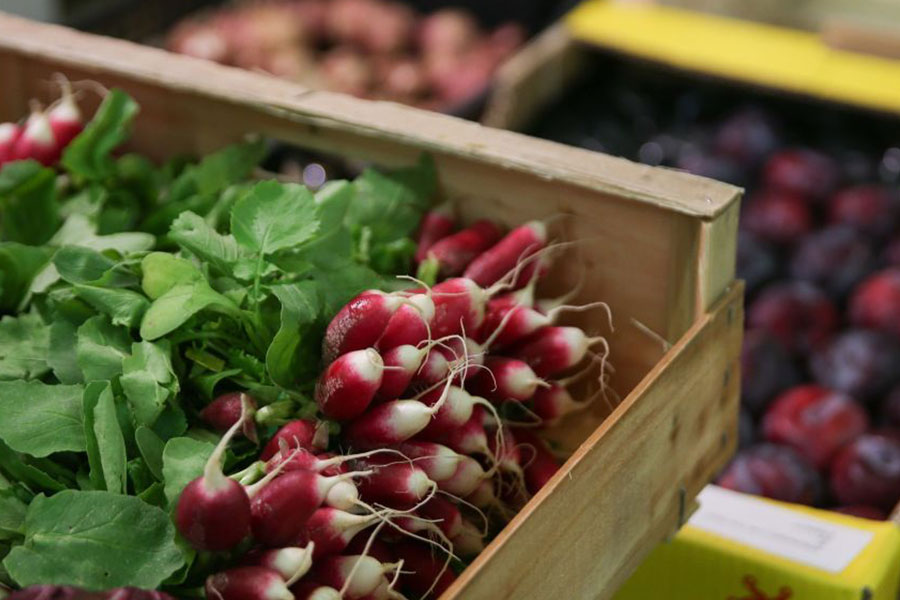 He launched the D.C.-based wholesale distributor Delta Produce from his garage in 2009 on the heels of the Great Recession. But Dionisopoulos says nothing could have prepared him for losing half a million dollars in revenue nearly overnight, as the coronavirus pandemic shuttered his business’s main streams of revenue: restaurants, hotels, and schools across the region.

“There was a deep panic,” Dionisopoulos says. “It was definitely emotional. I saw my best friends, I saw my restaurants, I saw my clients, I saw people go from having successful businesses to having nothing. We had to come up with an alternative.”

As restaurants limit their orders or close completely, Delta Produce is among the D.C.-area wholesale food suppliers that have been left with too much food and nowhere to sell it. But there is huge demand for home groceries—and delivery services—and a number of wholesalers are pivoting to direct-to-consumer sales to keep the lights on.

Baldor Specialty Foods, a New York-based wholesale distributor, launched home-delivery in New York City and other areas in the Northeast about a month ago, and the company announced last week that it was expanding to also serve the D.C. area through a facility based in Jessup, Maryland.

“More than 30,000 consumers in other major cities have already signed up for the service in the last week alone,” said Baldor’s CEO, TJ Murphy, said in a statement at the time. “That tells us one thing: we must continue to expand this service to other locations where we operate to help the people there as well.”

The company, which normally sells bulk orders to businesses, is including some more home-fridge friendly sizes. Delivery is free, but minimum orders are $250.

Delta, which provides large quantities of food to local restaurants like Magnolia Kitchen and Bar and schools like the University of Maryland, also transitioned from bulk wholesale to smaller, more fridge-friendly items. Through their online grocery store, Delta is offering fresh fruits and vegetables, meat, eggs, milk, and other household essentials to customers for at-home delivery or contactless pick-up at their Maryland warehouse. Prices for some items are a bit higher than you might see at the grocery store ($14 for 30 eggs or $6.79 for a half gallon of almond milk), though delivery is free over $100.

In addition to selling products directly on its website, the company also partnered with Choco Market, a platform that typically connects suppliers and restaurants, to facilitate at-home deliveries across the region. Through Choco’s website, users can purchase groceries and cleaning supplies for next-day delivery. Orders placed through Choco have a $100 minimum, in order to help replace the lost high-volume orders that typically come from restaurants.

While the wholesale industry struggles, Dionisopoulos is not blind to the hardships facing their restaurants partners across the area. Choco Market is donating 100 percent of their profit margin from Delta’s deliveries to the Restaurant Association Metropolitan Washington and Hook Hall Helps worker relief fund.

Choco Market CEO Daniel Khachab says Delta’s new direct-to-consumer service is an innovative way to support all levels of the food supply chain during the pandemic — from wholesale distributors, to restaurant employees, to consumers — while also preventing food waste and protecting farmers.

“We said ‘okay, we have to support our industry,’” says Khachab. “Not only are the supplier in trouble, and the restaurants are in trouble, but also the consumers too, in the end. And obviously, you have food waste right now, with all of this food that’s grown and restaurants can’t take it.”

ProFish, one of the D.C.-area’s major seafood distributors, also pivoted its wholesale model to online consumers. Buyers can select online from products like smoked trout, peeled shrimp, and live lobster before picking up the order (at a minimum of $50) at one of ProFish’s multiple “meet the truck” locations. (The company is also doing home delivery to select zip codes.)

As a part-farm, part-wholesale company, D.C.-based Little Wild Things is one of the food suppliers that doubly felt the impact of coronavirus on its supply chain. Prior to the outbreak, the farm—which specializes in microgreens and edible flowers—produced about 85 percent of its revenue from wholesale partnerships with local restaurants like Nina May, Chaia Tacos, and Coconut Club, and one large distributor, Coastal Sunbelt Produce. When the stay-at-home orders were enacted, Little Wild Things founder and chief veggie officer Mary Ackley says she saw about a 90 percent reduction in her wholesale demand over the course of one week.

“I almost shut the light off,” Ackley says. “I had to make a decision, do I come up with something new, or do I just call it.”

Following the lead of other farmers in the D.C. area that have seen a surge in demand for community supported agriculture programs, Ackley decided to revive Little Wild Things’ CSA-style salad delivery share to make up for the revenue lost from decreasing restaurant demand. With an already-established e-commerce infrastructure from a past CSA program, Ackley launched a spring salad share for at-home delivery, including different variations of shoots and micro-greens, as well as novelty items like edible flowers and cocktail fixings that were originally grown for D.C.-area chefs. The spring box quickly sold out with 200 subscriptions, and building off that momentum, Auckley released a summer box pre-sale for $235. So far, she has sold 65 subscriptions.

Despite nascent success with the direct-to-consumer model, Ackley says the service still needs to be expand in order to sustain her farm in the long term.

“But it’s still scary, because I don’t know what the future holds,” she says. “I don’t know if there’s going to be a longer-term change in the system and the way people shop.”

The pandemic is a calamity for many American retailers