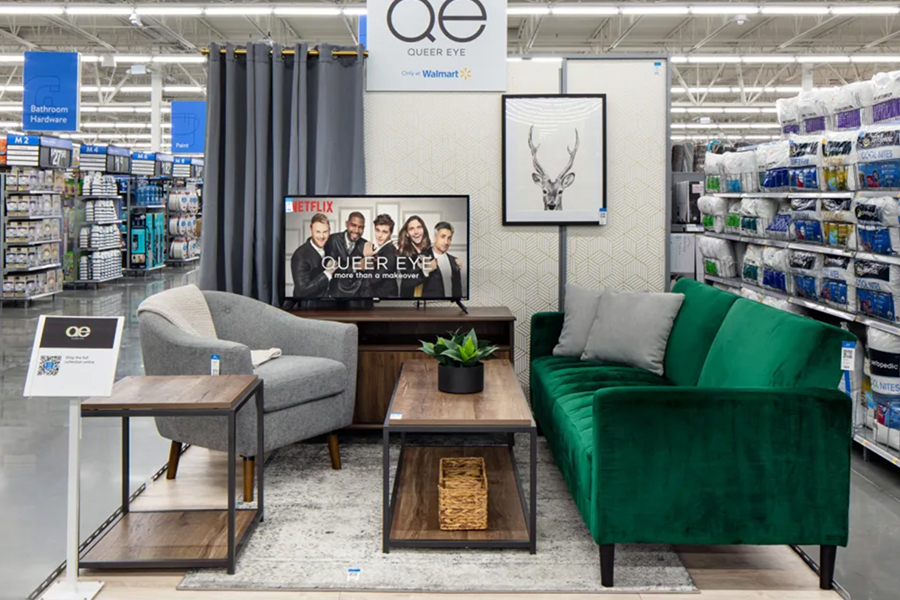 Two years ago, with the pandemic in full swing, Walmart revealed its store of the future. During a time when no one wanted to be around anyone else for very long, the company unveiled clearer signs in the store, to keep you finding your way faster, and better pickup areas outside the store, to let you stay in your car. As we put it then, “Walmart’s new store design proves browsing is dead.”

Two years later, COVID-19 is still rampant. But now, Walmart is revealing the second phase of its store redesign, a new approach to shopping. And their theme? Not speed, but “time well spent.”

“I say we want our store to play a role on a productivity journey, so customers and members save time finding the products they need, so they can spend time on experiences they want,” says Alvis Washington, VP of marketing, store design, and innovation and experience at Walmart. “The last phase was about saving time; this next phase is about spending time.”This next-gen design is still being prototyped and workshopped at a test store Walmart has set up in Springdale, Arkansas, where the company incubates its latest ideas with real customers. While not entirely finalized, Walmart is dedicated to this evolving strategy behind its store design, and shared the designs exclusively with Fast Company.

So, what does the next Walmart look like? Big corner displays. QR codes everywhere. And smart screens that know what you’re considering buying. It’s a mix of experiential purchasing (a trait that Walmart’s warehouse-like stores have lacked) and quick mobile app integration (where Walmart has already excelled for a few years now). The idea is that you can touch and feel products, but if you want to see a couch in another color, or even have it delivered to your home instead of buying it at the store, there’s always the app.

As Washington describes it, Walmart is “a big rectangle.” One main loop, dubbed “action alley,” circles you through the store.

Similar to Target’s redesign from 2017, Walmart is setting up large displays with specialized lighting to entice you off this clear-cut path. You might see a bedroom display by its notable, recent brand partnerships, like GapHome or Queer Eye. You also might see an area dedicated to baby strollers or vacuum cleaners.

“Walmart is a grocery store that sells apparel along with other things, but that doesn’t mean we have to sell apparel the same ways we sell groceries,” says Washington. “Customers want to be inspired … in new furniture, makeup, and trends. We want to disrupt their expectations.”Washington’s mention of groceries isn’t coincidental. A vast majority of Walmart stores offer groceries these days. And Walmart has operated for the last three quarters with revenue coming in slightly above expectations thanks to same-store sales being up nearly 10% in Q3 of 2021. The company attributes this windfall largely to its established supply chain, which has lured budget-conscious grocery shoppers who are weathering the worst inflation in 30 years.

Installing richer set pieces filled with products is a strategy used in department stores for decades, but Walmart says it may start employing visual merchandisers at its stores for the first time—specialists who regularly update these furniture and fashion displays to entice consumers.

Up until now, Walmart’s strategy has been to inundate the consumer with as much product as possible, squeezed into tight aisles to maximize selection.

“Instead of ‘stack it high, watch it fly,’ we want to show an alternative,” says Washington. To be clear, Walmart will still stack some items high! One example is denim, where Washington says customers want to see every size and style of jeans available. But for the most part, Walmart stores will have a lot more curated areas full of unboxed items for customers to touch and feel—especially in the reworked kitchen area, where KitchenAid mixers and Instant Pots will sit on shelves for you to “experience the same way you can a laptop or phone,” according to Washington.

However, Walmart isn’t stopping at these new, tactile installations. They’re also putting interactive screens across the store and posting QR codes strategically on more products and in more areas.

For Walmart, QR codes are about more than a simple integration with its surprisingly superb app. Sometimes, you’ll be able to scan one to get more information on a specific product–perhaps dimensions on a piece of furniture or other color options. Other times, scanning a code will bring up the entire collection an item is part of–for instance, pants that might match a shirt. And other times, scanning a QR code might just be an easy way to order something to be delivered that you don’t want to lug home, like a big bag of pet food. Furthermore, Walmart images QR codes being used for tasks like wedding registries.

“From this pandemic, customers are used to QR codes they’ve used in every restaurant,” says Washington. “But you can’t just put QR codes around the store . . . we wanted to make sure we were solving for the friction a customer may have in the store, and that could vary by department.”QR codes are key in Walmart’s strategy to bridge what it stocks physically in the store with what you can more easily buy online. To make that work, Walmart will continually assess what needs to be stocked within each department, and what they can ship you in a day or two instead.

“If I’m shopping for a living room suite, I don’t expect the items to be there, I expect them to be shipped to me,” says Washington. “But if I’m looking for a throw pillow, I want that there [to buy and take home].”

Screens are nothing new to stores; they’ve been everywhere for decades. But despite the fact that most of us peruse the store with smartphones in our pockets, Walmart’s new design features many large, updated screens to offer contextual information.

A new men’s grooming section—which was also an initiative pioneered by Target a few years ago—features a super-wide screen over the top of the aisle. The surprise is that this screen is passively interactive. In other words, when you grab a razor off the shelf, the screen will automatically display customer reviews about that specific razor.

On one hand, perhaps you just want to check out a razor without the screen broadcasting what you’re looking at. On the other, Walmart is trying to find the sweet spot of how and when to give a customer the extra details they need to make a buying decision. (So far, Walmart claims that 87% of shoppers in its test store find the many updates appealing, and about half say they’ll shop more at the store as a result.)“We’re playing around and optimizing [the experience],” says Washington. “How do they know this vacuum is good for pet hair? We have to serve that up for people . . . what part of the journey do we need to help them?”

With so much investment in new, experiential displays and smarter digital experiences, you might expect Walmart to take their store investment further. The ceilings are exposed metal beams. The floor is polished concrete. And, how can I say this politely? Neither is done in the cool, industrial way. Will this be the moment that Walmart updates the drab fit and finish of its stores?

In a word, no. Washington says that all the finish work Walmart was interested in doing—which was focused exclusively on signage—happened in the last stage of the redesign. Walmart is not going to install drop ceilings and make other concessions to appear whiter and brighter, like a Target.“Some things are heritage. The whole warehouse feel is something we lean into,” says Washington, who notes that the warehouse feel is more than a cost saver in building out stores; it broadcasts the “value” you get shopping at Walmart. “That’s who we are. We don’t want to try to be upscale, that’s not what we’re trying to do . . . [we want] to offer an elevated experience the Walmart way.”

The company plans to start rolling out the redesign in 2022. However, it only updates between 800 and 1,000 (or about 20% of its stores) each year. In other words, it might still be a while before you see this store design live at your local Walmart.