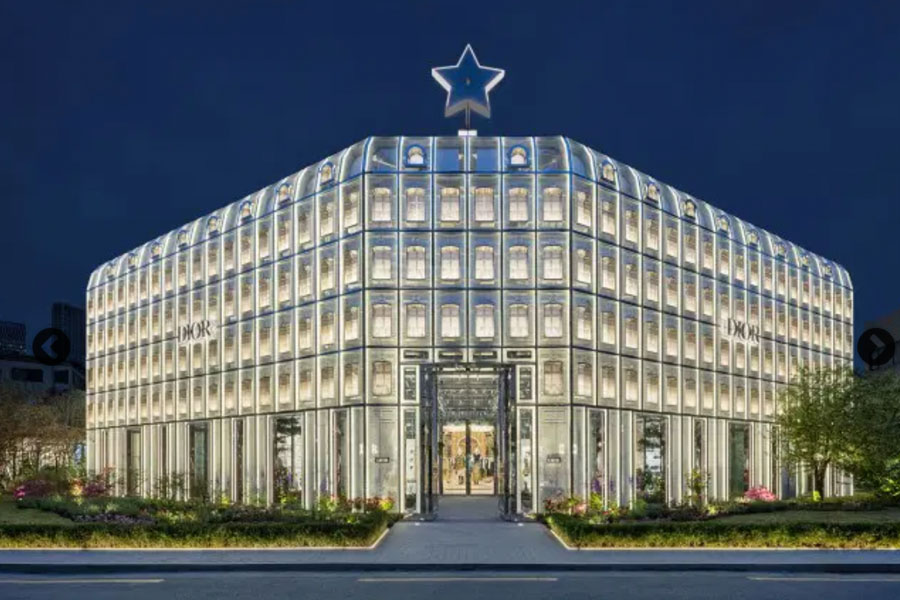 Dubbed as “the next generation of pop-up stores” by Pietro Beccari, chairman and CEO of Christian Dior Couture, the sprawling store opened its doors on 1 May and will stay open for the next three years. The elevated, temporary store will evolve along with the seasons and collections.

Built above a former parking lot, the roofless and open-air structure houses a café, a garden and the Dior boutique. At a glance, the boutique commands attention with its “luminous glass showcase” look. There is also sleek and minimalist furniture crafted by Korean designers like Kwangho Lee and Jeonghwa Seo.

Inside Café Dior, is a beautiful video backdrop inspired by the lush gardens of founder Christian Dior’s Granville childhood home. The resulting immersive decor was a collaboration between the luxury house and Korean design company D’strict.

The 7,500-square-foot complex recalls the façade of its historic headquarters in Paris — the 30 Montaigne which opened earlier this year on 6 March, after extensive renovations of over 2 years and draws an average of 2,800 people daily.

The store’s metallic mesh structure is a surprising yet fitting addition to the trendy Seongsu-dong district. An affluent district as well, it has been compared to Brooklyn with its organic restaurants and craft coffee bars. And around the area are many little leather workshops from the 1800s.

“For me, luxury is emotion and it’s surprise. You are where people don’t expect you to be. In this quarter, there’s no luxury at all. There are many, many young people at the weekend. It’s a meatpacking district, it’s full of butchers,” Beccari noted on WWD.

Speaking on Korea as a market, Beccari shared that it was smaller five years ago but very sizable and gaining now. “I believe that with the show and with this incredible experience store, it’s going to be a fantastic boost for our morale, for our troops over there, and also awareness for the clients,” he added.

Between Shopping and Entertainment: Welcome to the World of Social Shopping

Crate and Barrel names SVP of the metaverse