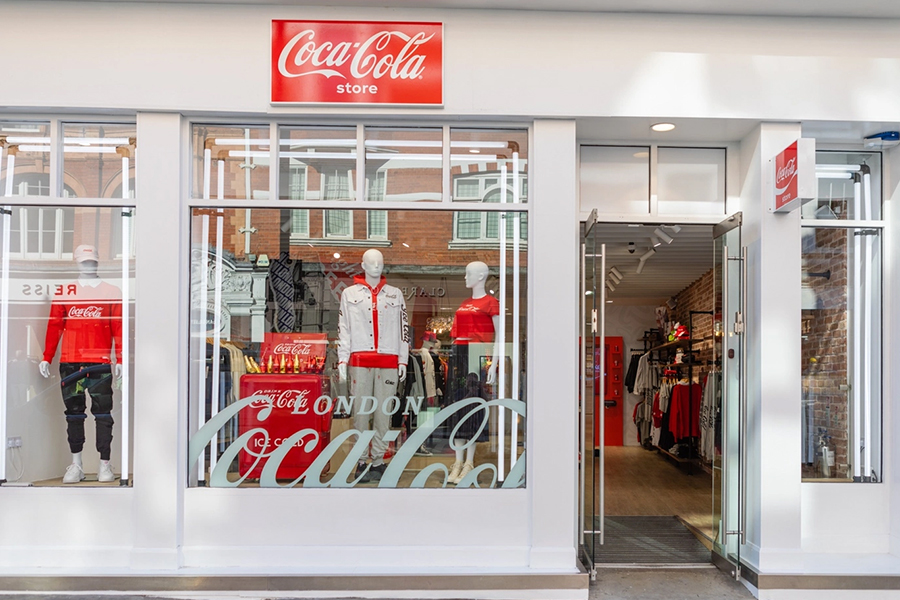 Coca Cola has opened the doors to its first flagship store in Europe today, in a vote of confidence for the West End.

After a number of stores in the US, including the beverage titan’s home territory in Atlanta, Coca Cola is testing the waters with a UK experiential destination.

The store is set to be open until September at the moment, as bosses trial a direct-to-consumer store format in Europe for the first time.

Shoppers will be able to purchase limited edition merchandise, including fashion collaborations with Staple and Lees.  Other collaborations include with designers such as Soho Grit, Alma de Ace, BAPE, Herschel, and BE@RBRICK.

Visitors can buy mocktails made with Coca Cola products at a dedicated beverage bar – drinks on the menu at the moment include Winners Circle, Mango Sunset and an Orange Lolly Float. There is also an opportunity for shoppers to design customised drink cans, with personalised messages on.

Michelle Moorehead, vice president of licensing and retail, said the store would give shoppers “fresh ways to experience our drinks.”

“Through a collection of products made from recycled materials, it also gives us a great opportunity to share our sustainability commitments with people and bring them with us on our journey to a World Without Waste,” she added.

It comes as retail goliaths have continued to be keen to stake a physical presence in the West End, despite the departure of big names such as Topshop.

Furniture giant Ikea is set to open up shop, after buying Topshop’s former flagship store on Oxford St for £378m.

In recent years, the Apple and Nike stores have become weekend destinations for many, Loizou explained. “People will go into those destination spaces to just experience it and look at physical objects up close, even if people don’t buy them there,” he said.

Earlier this week, CityA.M. reported that Coca-Cola Co surpassed quarterly revenue expectations after raising prices and the reopening of theatres and restaurants.

In results published on Monday, the firm said demand for soft drinks had come back with zest after entertainment and hospitality venues had reopened with the easing of Covid restrictions.