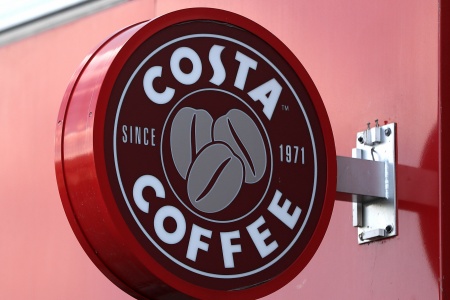 Coca-Cola Co. agreed to buy the U.K. chain Costa Coffee for 3.9 billion pounds ($5.1 billion), stepping into a battle with Starbucks Corp. as it gains a global brand in hot drinks.

Whitbread Plc is selling Costa, which operates more than 3,800 locations in 32 countries, rather than go ahead with a plan announced in April to spin it off as an independent company. Whitbread shares soared the most in 19 years as analysts said the business fetched a “surprisingly high” price.

Makers of soft drinks are branching out as consumers seek alternatives to sugary sodas. Earlier this month, PepsiCo Inc. agreed to pay $3.2 billion for SodaStream Ltd., which makes carbonated-water dispensers. This is Coca-Cola’s biggest push into operating stores, just as a series of U.K. retailers such as BHS go out of business.

Whitbread shares surged 17 percent to 4,717 pence at 8:24 a.m. in London as the sale gives the U.K. company a quick way out. Its plan to list Costa as an independent publicly traded company would have taken up to two years, and the company was under pressure from activist investors to turn its focus to its Premier Inn hotel operations.

Costa outranks Starbucks in the U.K. and is expanding in markets such as China. The company also operates a business of 8,000 self-service machines. Costa was one of the few big coffee chains up for sale after Nestle SA and the Reimann family’s investment company JAB both went on an acquisition spree in the segment.

Coke sells coffee under the Georgia brand in Japan and has some other local products for specific markets.

The sale will yield a “substantial premium” to the value that would have been created through a spinoff, Whitbread said. The company will return most of the proceeds to its shareholders, it said. The price is 16 times this year’s earnings before interest, taxes, depreciation and amortization.

Nestle to Take on 500 Starbucks Employees in Coffee Alliance