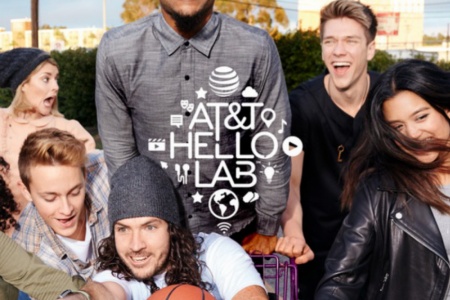 In hopes of becoming the mobile provider for the “connected generation,” AT&T is adding to its entertainment offerings with the launch of Hello Lab.

The company announced Thursday that it is again partnering up with Fullscreen to create a yearlong project featuring 10 digital creators at the forefront of mobile entertainment.

The program gives these hand-selected influencers — including YouTuber Grace Helbig, travel duo Damon and Jo, musicians Us The Duo, magician Collins Key, Instagram comedian Brandon Armstrong, and Snapchat superstar Shaun McBride (a.k.a. Shonduras) — the opportunity to “create their most innovative dream projects with a cadenced release schedule throughout the year offering multiple touch points for consumers.”

Throughout 2016, these creators (deemed “Hello Lab ambassadors”) will then give their viewers a variety of series, live experiences, albums, giveaways and podcasts. The creators “will use their phones as mobile production studios, the network to broadcast their stories, and social media to connect them all.” AT&T will also run a 360-degree marketing campaign, co-created with the influencers.

AT&T’s initiative follows ramped-up efforts from competitor Verizon to push out its mobile entertainment platform go90, which launched in October. Since then, it has struck deals with digital entertainment players such as StyleHaul, pop culture network DanceOn, AwesomenessTV’s millennial mom network Awestruck and Disney-owned Maker Studios. “AT&T is at a pivotal point for our community as we are moving into space of being an integrated provider,” Valerie Vargas, vice president advertising & marketing communications of AT&T, told Mashable. “Entertainment is really at the forefront of that.”

The news also marks the expansion of the partnership between AT&T and Fullscreen, who have been collaborating since 2012 on approaches to original social storytelling. In 2014, Fullscreen sold a majority stake to Otter Media, the joint venture between the Chernin Group and AT&T. The companies are behind the popular unscripted YouTube series @SummerBreak, which is going into its third season this summer with a total of 150 million views.

After seeing the success of @Summerbreak and Snapchat series SnapperHero, AT&T realized the opportunities that the digital space provides to consumers.

“We realized with our award-winning social influencer programming that we’ve tried it, we nailed it, now let’s scale it,” Vargas added.

And Fullscreen was 100% on board. The Playa Vista-based company has 75,000 YouTube, Facebook, Vine and Instagram creators with 600 million subscribers who help generate more than 5 billion video views across the digital media company’s global network each month. The company’s talent roster includes Helbig, The Fine Bros., Andrea Russett, Jack and Jack and other popular creators.

“I think AT&T is really making that commitment to fans and the people who are creating things out in the world,” Thoensen, senior vice president of Fullscreen Strategic Content Group, told Mashable.”They have really stepped up…and we applaud them as partners.”

But selecting talent was a meticulous process.

“We looked for influencers that really had a genuine message and genuine connection with their audiences,” Parks, who also serves as senior vice president of Fullscreen Strategic Content Group, told Mashable.”We also wanted to make sure they had an active relationship with their audience and were interested in bringing the audience new experiences.”

“The way we started relationships with these influencers is we said, ‘what do you want to make next?’” Parks said. “Each one of them had a different approach. We worked with our team here and at AT&T on how we could bring those ideas to life.”

The first creators on deck: Damon and Jo’s fan-driven travel series Dare to Travel, which launches Thursday on YouTube. The audience participates by “co-creating and using themed cards as game pieces to determine the next travel challenge for the pair.” New episodes will appear weekly on their channel.

“We’re just so honored to be part of such an innovative program,” Jo Franco, of Damon and Jo, said in a statement. “Ever since they selected us, our lives have been in hyper-speed. We keep pinching ourselves to make sure we aren’t just in a really prolonged daydream.”

Helbig, who has more than 5 million followers across her social platforms, echoed the excitement for being part of the first batch of ambassadors.

“The great thing about this program is that AT&T is really taking the time to figure out what is important to us and our community then finding ways to let us explore those creative ideas,” she said in a statement. “They’re putting faith into a girl that talks to a camera alone in sweatpants. They get it.”

As the year progresses, AT&T and Fullscreen will continue to select more creators to add to the program.

“I really hope that this connected generation thinks of AT&T as their catalyst for things they aspire to do and want to do,” Vargas said. “And that they too can become the next influencer associated with the lab.”