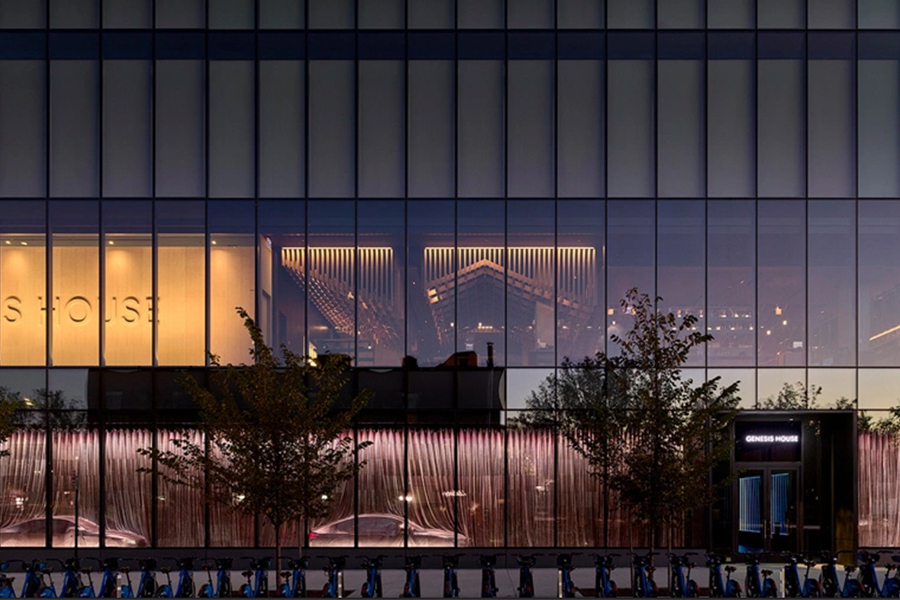 From the outside, the cars at Genesis House are shrouded in a metallic curtain. Step inside, and you’ll see the entire vehicle lineup from the young Korean brand bathed in light among concrete pillars and panels of wood and glass. But the aim of Genesis House, which opens to the public on November 19, isn’t to sell cars or even be a place to take orders or schedule test drives. Instead, the 46,000-square-foot space aims to expose New Yorkers to Hyundai’s budding luxury nameplate and become a hub for fine dining and events.

“We didn’t want to design a typical car showroom, we wanted the space to feel alive.” says Eulho Suh, whose Seoul-based firm Suh Architects won the design competition to create Genesis House, along with other more sales-oriented Genesis venues around the world. 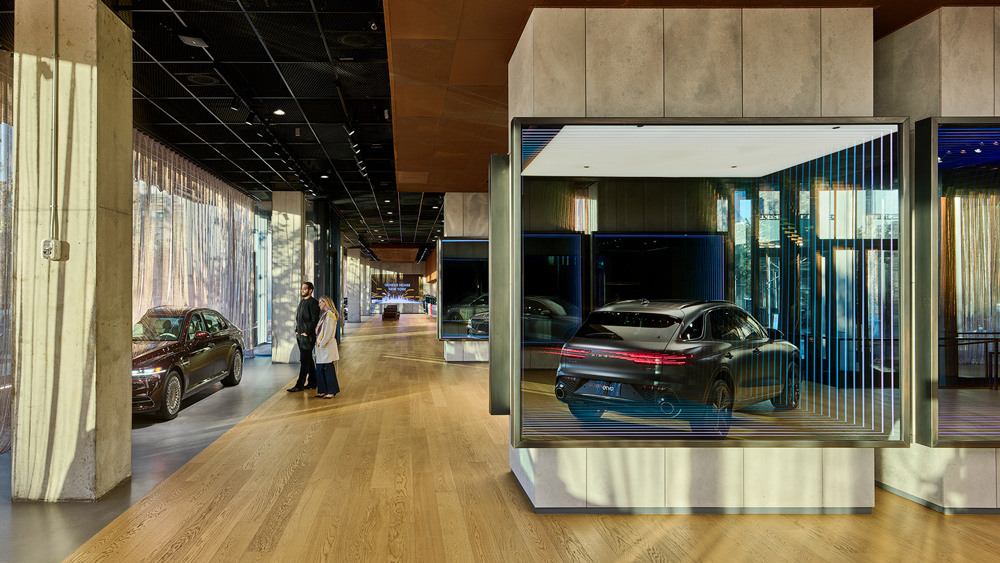 Although the Genesis House does not sell cars directly, it does have a gallery-like showroom on the ground floor. Photo: Courtesy of Genesis House.

Spanning three levels on 10th Avenue, between 13th and 14th Streets, Genesis House sits in the heart of the Meatpacking District, in sight of the High Line and Little Island. The showroom on the ground floor is only a fraction of the expansive operation; the basement, with its open floor plan and large video wall, is slated to host concerts, discussions, and other gatherings. On the second floor, open wood latticework frames a curated collection of books and other trinkets, flanked by a tea pavilion on one side and a restaurant on the other. For the latter, chefs Cho Eun-Hee and Park Sungbae from the Michelin-starred Onjium restaurant in Seoul have trained staff to recreate some of the same dishes Korean nobility have dined on for centuries.

But Genesis isn’t the first car company to settle the young West Side neighborhood. Next door, a standalone space is dedicated to Mercedes EQ, the German brand’s arm of electric vehicles. And just a short walk away are Tesla and EV newcomer Lucid (whose Air sedan has impressed us in terms of both design and technology). 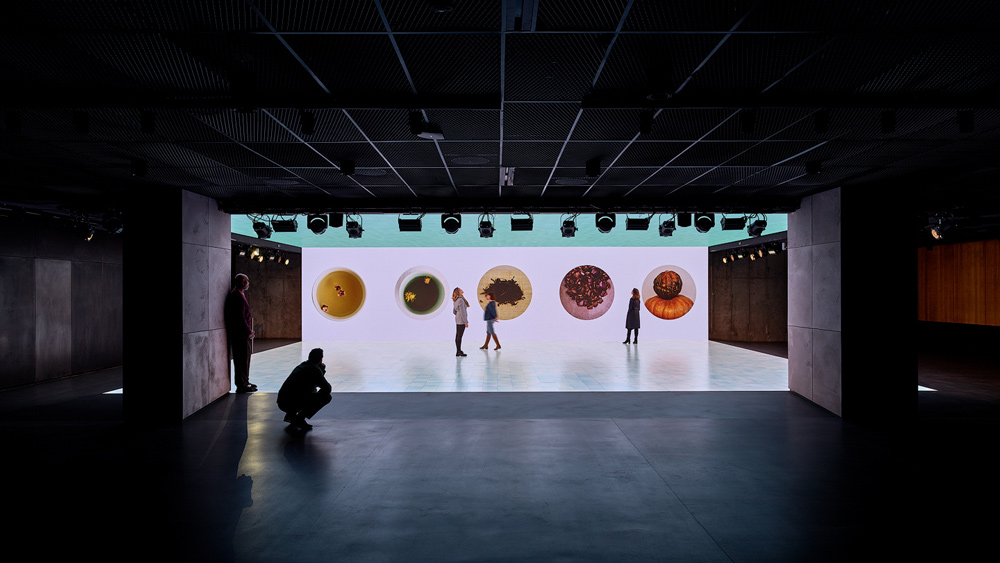 The basement, with its open floor plan and large video wall, is slated to host concerts and other gatherings Photo: Courtesy of Genesis House.

The closest comparison to Genesis House, however, is the neighboring Intersect by Lexus, a space we first visited in spring of 2017 during the New York International Auto Show. Also built on three levels, Intersect features a lounge with curated books and objets d’art, a space dedicated to special exhibits and, most notably, a restaurant with a rotating roster of world-class chefs from around the globe that take up residency for a few weeks to a few months. After our visit to Genesis House, the resident chef at Intersect prepared Caribbean-inspired dishes for us from Nina Compton’s Compere Lapin in New Orleans. “It was really important when we opened to have reflections from all around the world, because that’s who the Lexus customer is,” an Intersect manager told us. 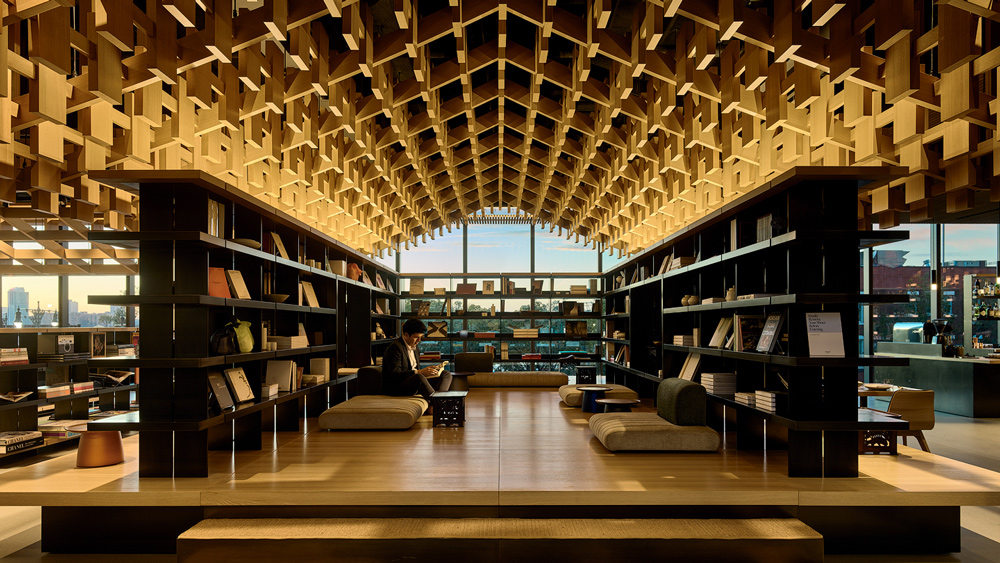 Intersect is even a softer sell than Genesis House; there are no cars here—unless you count the hundreds of miniature, Hot Wheels–sized models on the wall leading to the washrooms.  Nods to the Japanese luxury brand are more subtle, with photographs of Lexus models mixed in among artwork, and a wall sculpture that features evolutions of the brand’s front grille and other various parts, all painted in white. And those who look closely can see L-shaped logos on the marble and wood latticework that mimics the cars’ “spindle” front grilles. The bar is trimmed with the same leather used on the LFA supercar, but the automotive references end there. “We don’t want to hit customers over the head with the car theme,” our Intersect host told us.

What sets Genesis House apart from the others, though, besides the vast amount of square footage and the undoubtedly bigger wad of cash the company is shelling out, is that Hyundai’s luxury space is focused first and foremost on exposing guests to Korean culture and design. “Korean architecture is the idea of working with the void and your relationship with nature in a continuous flow,” Suh says. He points out infinite mirrors that create the illusion of more space, and the Korean rice paper that gives an ethereal, translucent quality to the lighting. In the restaurant, guests dine on dishes such as suranche, a type of seafood salad that’s traditionally served to important guests. 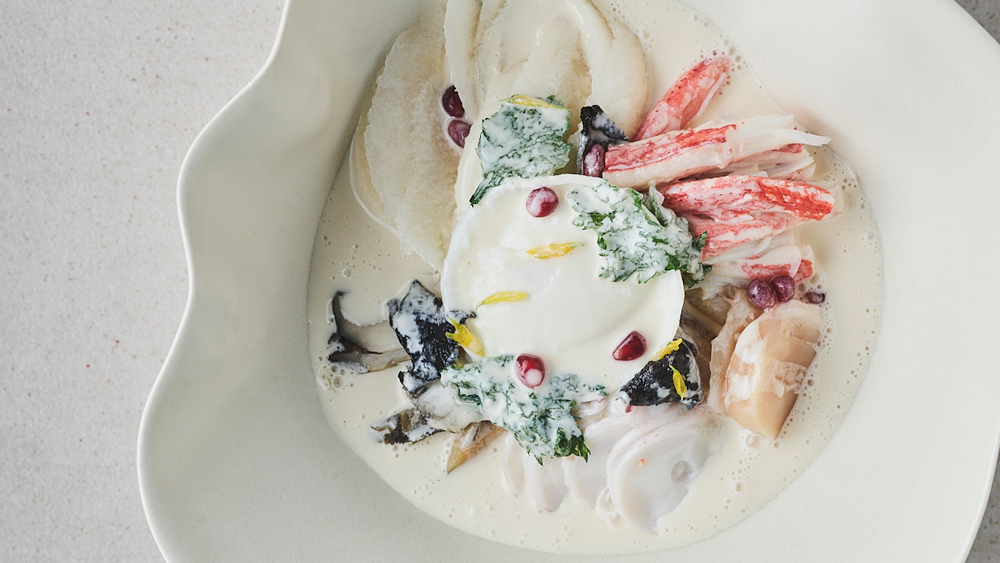 At the restaurant, guests can dine on dishes such as suranche, a Korean seafood salad. Photo: Courtesy of Genesis House.

One could argue that the trailblazer of the modern NYC car lounge was Cadillac. The marque opened its Cadillac House in 2016 on SoHo’s Hudson Street during the brief time GM’s sub-brand relocated its headquarters from Detroit to the Big Apple to polish its reputation. Also meant to be a lifestyle venue without the pressure of sales people, Cadillac House included a café and hosted special events. Its time was short-lived, however, and Cadillac closed its doors in 2019 when the company pulled out of New York and headed back to Michigan. 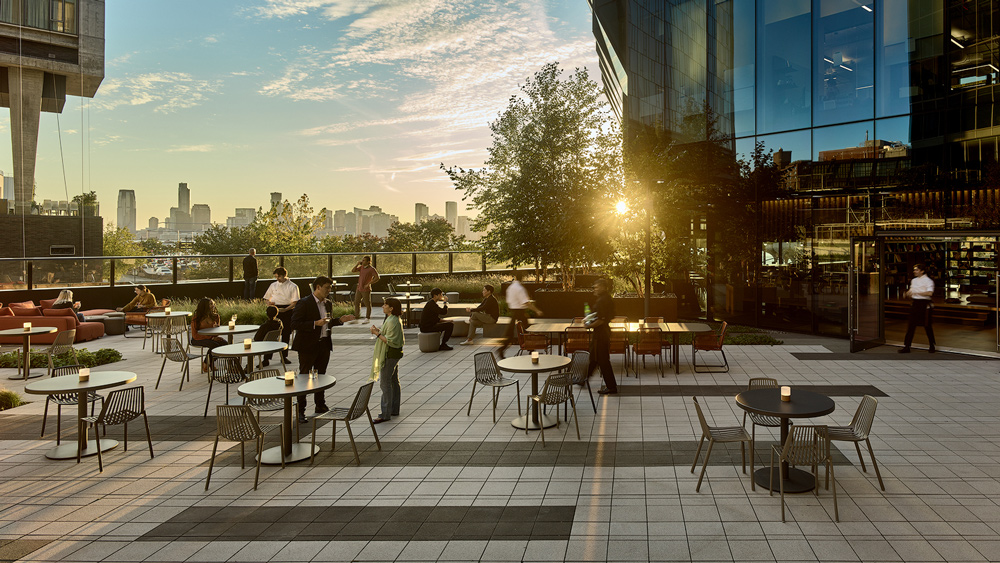 Although executives bill Genesis House as a type of fancy cultural center that serves the community, the underlying goal is clear: the company wants to sell cars. Jose Munoz, Hyundai’s global COO and CEO of Genesis North America, tells Robb Report that “North America plays a critical role for Genesis.” What isn’t so clear is the way these incredible investments equate to sales. Both Genesis and Lexus representatives told us that neither capture customer data to track potential buyers or generate leads.

“Many luxury brands are installing fancy lounge and dining spaces in upscale high-traffic urban areas. Ultimately, they are intended to help the consumer understand what the brand is all about and create a connection between the consumers and the brand message,” says Ed Kim, vice president of industry analysis for automotive research firm AutoPacific. “What is difficult to gauge is what effect these have on consumer awareness and, ultimately, sales. Will an expertly cooked roasted duck with an exquisite wine pairing inspire the diner to consider a Lexus? Most importantly, do enough potential customers experience these spaces to have a measurable impact on sales long term?” Reviews for the now-defunct Cadillac House, for example, rarely mention the cars or the brand, and are more to the tune of “it has nice coffee and is a good place to work on my laptop.” 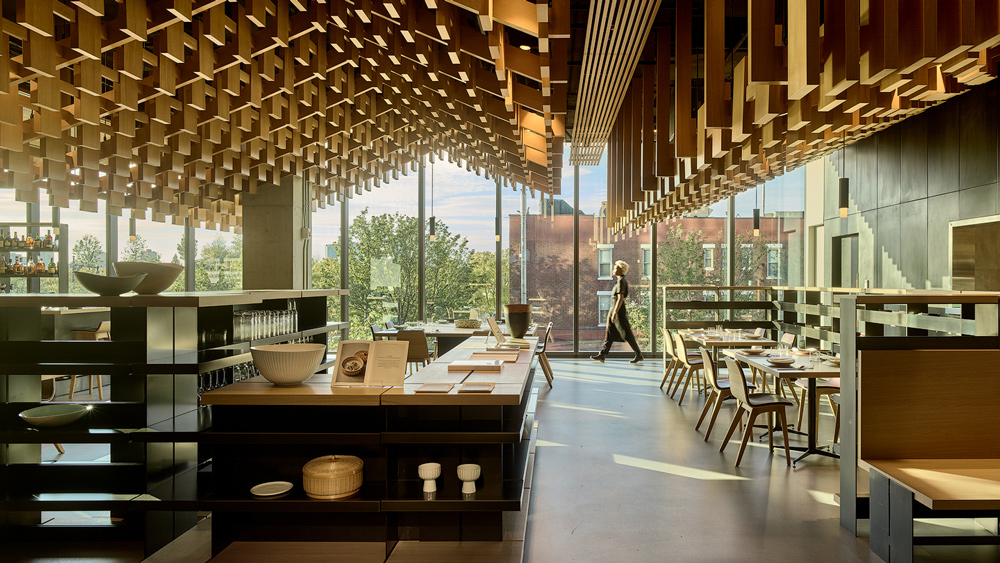 The Genesis House restaurant, where staff have been trained by chefs Cho Eun-Hee and Park Sungbae from Michelin-starred Onjium in Seoul. Photo: Courtesy of Genesis House.

Still, in these days when luxury is defined more through experiences than products, Genesis House and others might prove to be a worthwhile investment—as long as the operations can cover the rent. “In the end, if a luxury brand can raise awareness with little to no net cost with the revenue produced,” Kim surmises, “these spaces can represent a good deal.”