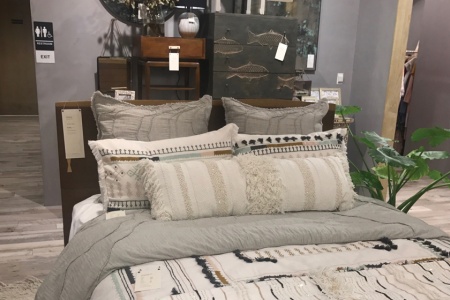 Anthropologie, the upstairs neighbor in the Urban Outfitters hierarchy of store brands, is attempting to do something that is virtually unprecedented in the world of retailing: take a brand that has been largely fashion driven, with a smattering of home, and substantially up the home furnishings quotient.

While mixing home products into an apparel environment has been the foundation of general merchandise stores, be it a department store or a discounter, it is a fairly unusual concept in the world of specialty store chains. Some people may remember that several retail lifetimes ago, Pier One used to carry some clothing. They disappeared a long time ago, replaced by endless riffs on candles, drinkware and poorly made small tables.

In the reverse equation, perhaps you recall that fashion retailers like The Gap, Victoria’s Secret and Banana Republic have dabbled in home products from time to time, usually with equally as dismal results. The fact of the matter is that home and fashion are two very different animals: different supply chains, different sell-through rates, different turns, different markdown structures, and very different in-store/online shopping experiences. There are good reasons why IKEA doesn’t have a junior sportswear department and Uniqlo isn’t selling toaster ovens.

Urban Outfitters, from the start, had a different strategy. In both its namesake division and Anthropologie, there has always been a home furnishings component, mostly centered around textiles and decorative accessories like candles, wall art and assorted novelty paraphernalia. More recently, Urban has added a significant amount of home to its online business, moving into furniture like sofas and tables and serious tabletop offerings. Anthropologie kept its home story somewhat more modest, both in-store and online. It has tended more to home accent décor merchandise with a little bit of furniture and some textiles.

Not that that was always the case. The first Anthro store, opened in 1992 in Wayne, Pennsylvania—not too far from current corporate headquarters in downtown Philadelphia—featured a near-50/50 split of home and fashion. Founder Richard Haynes always positioned the brand as a step up from the original Urban unit, which appeals to a 20-something shopper who may or may not be living in their parents’ basement. The Anthro customer target was older—30-45, with a corresponding older taste and income level. Before not too long, fashion took over the store, resulting in a more recent 80/20 apparel/home split. Corporation-wise, counting Urban and the Free People fashion unit, which doesn’t carry any furnishings, home accounts for about 17 percent of overall sales, which last year were nearly $3.5 billion. It has not been smooth sailing for the company over the past several years. The stock is sitting near recent historical lows and comments from Haynes about the general retail malaise haven’t helped.

Even if Wall Street isn’t drinking the Kool-Aid yet, Urban clearly sees home as part of the solution. Last September Haynes told analysts that it would significantly up its home game. Discussing why home would work in Anthro stores, he said the store’s target customer’s “desire to buy home products has not decreased. To the contrary, the Anthropologie customer spends as much per annum on home products as she does on apparel, so we see a significant opportunity to offer a much fuller assortment of home products and capture more of her spend.”

On that same call, David McCreight, CEO of the Anthropologie Group, outlined a strategy that had the store moving away from just offering decorative accents and more gift-oriented merchandise and becoming more of a legitimate, full-line home furnishings retailer with core products like upholstered furniture as well as dining room and bedroom furniture. Ultimately, the executives said, they would reduce the apparel side of the store from its current 71 percent to just over half. Beauty would continue to hold down about 5-8 percent of the merchandise mix but the rest would be home. This would mean some larger stores going forward—perhaps as many as 25 to 50 flagship-style stores at double to triple the size of the current average of 10,000 square feet—as well as some retrofits of existing units. Ultimately, Urban said it will double the size of its home business to 20 percent of corporate sales—$700 million based on current sales—within three years.

To get an idea of how that is going to be manifested, you need to head downtown to the first Anthropologie store to take on the new home strategy, in the Financial District of lower Manhattan, just a few blocks from the World Trade Center. The store—which counts Nobu as its next store neighbor if that gives you a rough idea of the projected customer demographic—measures out at about 20,000 square-feet, with close to half of that devoted to home.

From the street level, the store at 195 Broadway (the original AT&T corporate headquarters) looks like a typical fashion-focused outlet, but take one flight down and fashion takes a backseat to a dramatically expanded home offering. Here you’ll find real home furnishings. There are couches and chairs, tables and shelving, mirrors and framed art, bed and bath, rugs and mats, dinnerware and drinkware. All this in addition to the candles, decorative pillows, picture frames and other decorative doodads that have been mainstays throughout the years. The spacious department is laid out with room settings, something new for the store, accessorized with not-for-sale props that reinforce the design aesthetic. Display fixtures are consistent with that design environ: no pegboards or rack systems here, thank you. Also new is a custom furniture Design Center area, where shoppers can pick a frame, select a covering from a fabric library and submit a special order. An oversized video screen helps walk the customer through the process although there was an abundance of Anthro-approved and -attired salespeople on the selling floor on a recent visit.

All of this merchandise—and much more—is duplicated on the website, including an extensive custom furniture section with ordering capabilities. Home-specific direct mail catalogs reinforce the story.

All of it represents a significant investment in the category, one that obviously the store believes in. As such it represents a foray into unchartered territory. And one in which it is not entirely alone. Fast fashion apparel retailers H&M and Zara are both moving into home products, the former both in-store and online, the latter just on e-commerce so far. Each operates stand alone home stores in Europe. And let’s not forget sister company Urban Outfitters, which continues to broaden its home assortment. But all of those retailers are targeting a younger, less-affluent customer, younger millennials, and the emerging Gen Z shopper. Anthropologie is firmly banking on the older millennial and Gen X shoppers who have traded up and are entering their prime home furnishings consumption years.

Its competition is not H&M or Urban, or even IKEA or West Elm. It is going up against the meat of the home furnishings spectrum, mainstream retailers like Bed Bath & Beyond and Macy’s, not to mention lifestyle chains like Pottery Barn, Crate & Barrel and even RH. These are not lightweights and are going to do whatever is necessary to defend their home turfs.

But as crowded as the furnishings space is, it’s nothing compared to fashion so in that respect the Anthropologie positioning makes sense. And if you believe the theory that the millennials are moving into their prime home furnishings purchasing years it is even more plausible. As with everything in retailing, it all makes sense in theory. But Anthropologie knows all too well that while anthropology is very much a science, retailing is anything but.

From The Robin Report

Google and Walmart Partner With Eye on Amazon

Amazon and the Parking Problem