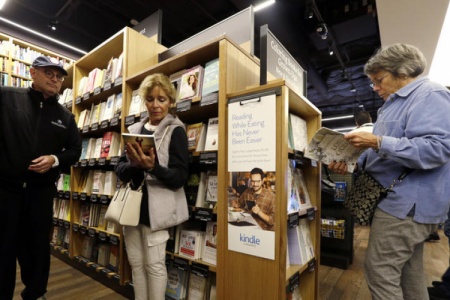 Amazon spokeswoman Deborah Bass said the store, targeted to open next year, will be at 3443 N. Southport Avenue, the former location of the now-closed Mystic Celt bar and restaurant. “We are excited to be bringing Amazon Books to Southport in Chicago,” Deborah Bass added.

Amazon opened its first brick-and-mortar bookstore in Seattle, where the company is based, last fall.

Amazon plans to mix the benefits of online and offline book shopping, with a selection chosen based on customer ratings, pre-order and sales figures, and its employees’ assessments. Customers can wander the aisles and page through a title before buying, but books face the customer, accompanied by reviews from Amazon shoppers, as they would be online. Customers can buy in-store or place an order for delivery. Amazon devices, such as the Kindle e-book reader and Fire Tablet, are also available for in-store testing.

It’s the latest example of an online retailer branching out into brick-and-mortar, perhaps more striking with Amazon, which started as an online bookseller but quickly grew into an e-commerce giant selling everything under the sun.

“I think a big part of the bookstore is building awareness of Amazon and bringing more of a human face to the brand,” said Neil Stern, senior partner at Chicago-based McMillanDoolittle. “Forty-one million of us and counting are Prime members, but you can spend a lot of money and never interact with a human. It’s a way to personalize it.”

Sandeep Mathrani, CEO of mall operator General Growth Properties, said during a call with investors earlier this year that Amazon planned to open up to 400 physical bookstores, but he later said his comments weren’t meant to represent Amazon’s plans.

Based on the handful of locations reported so far — San Diego, the Portland, Ore. area and, now, Lakeview — the number may have been high, but retail analysts have said more offline retail locations are likely on the way.

“You’re never going to build a single store with all the items they have, but I think they’re exploring what the physical representation of Amazon will look like,” Stern said.