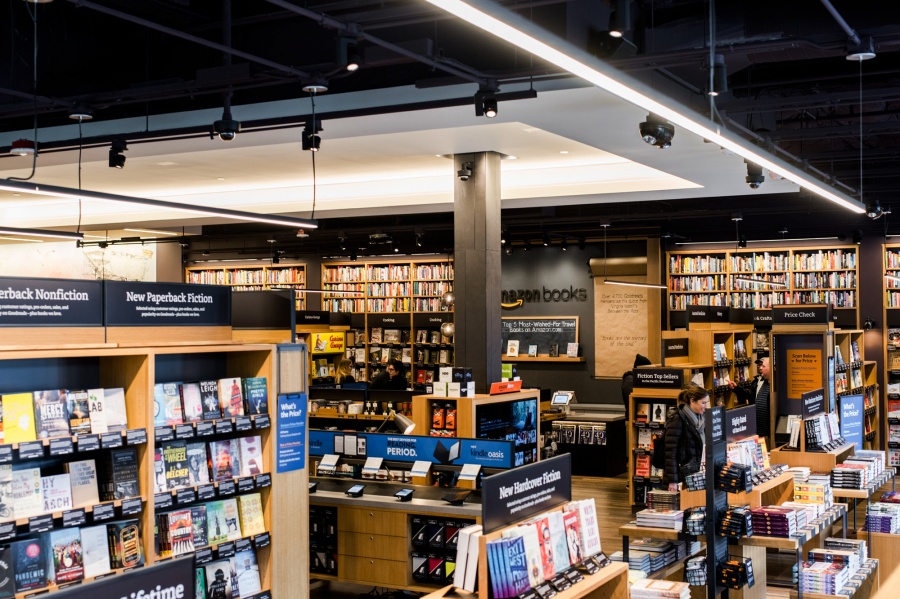 The intimate audience of entrepreneurs and academics, attending an
Amazon conference on robotics and artificial intelligence, chuckled.
Later, Mr. Bezos posted a photo on Twitter of himself in the suit with a
more menacing air, the robot’s arms raised as if about to deliver a
bone-crushing bear hug.

For years, retailers have been haunted by the thought of Amazon using
its technological prowess to squeeze them into powder. That battle has
mostly played out on Amazon’s home turf, the world of online shopping.

Now the fight is coming directly to retailers on actual streets around the globe, where Amazon is slowly building a fleet of physical stores. And while most of the attention has been focused on Amazon’s grocery store dreams, the company has a more ambitious collection of experiments underway.

If those experiments work — and there is no guarantee of that — they could have a profound influence on how other stores operate. Over time, they could also introduce new forms of automation, putting traditional retail jobs in jeopardy. At the same time, locating those stores close to customers’ homes could also help Amazon further its ambitions of delivering internet orders within hours.

The company is exploring the idea of creating stores to sell furniture and home appliances, like refrigerators — the kinds of products that shoppers are reluctant to buy over the internet sight unseen, said one of several people with knowledge of the discussions who, in conversations with The New York Times, spoke on condition of anonymity because the plans were confidential. The stores would serve as showcases where people could view the items in person, with orders being delivered to their homes.

These would not be your average Home Depots: Amazon has considered using forms of augmented or virtual reality to allow people to see how couches, stoves and credenzas will look in their homes, the person briefed on the discussions said.

Amazon is also kicking around an electronics-store concept similar to
Apple’s retail emporiums, according to two of the people familiar with
the discussions. These shops would have a heavy emphasis on Amazon
devices and services such as the company’s Echo smart home speaker and
Prime Video streaming service.

And in groceries — a giant category in which Amazon has struggled — the company has opened a convenience store that does not need cashiers, and it is close to opening two stores where drivers can quickly pick up groceries without leaving their cars, all in Seattle. It has explored another grocery store concept that could serve walk-in customers and act as a hub for home deliveries.

Overseas, Amazon is quietly targeting India for new brick-and-mortar
grocery stores. It is a vast market, and one still largely dominated by
traditional street bazaars where shoppers must wander from stall to
stall haggling over prices and deliberating over unrefrigerated meat
sitting in the dusty open air. Amazon’s internal code name for its India
grocery ambitions: Project Everest.

Last week, Amazon opened its fifth physical book store in Chicago, and it has five more announced locations under construction.

It is possible that some of the store ideas will never see the light of day. Groups within Amazon are often encouraged to come up with zany initiatives (this is the company that popularized the idea of drone deliveries). Many ideas are chucked after deeper scrutiny by executives. Amazon declined to talk about any stores it has not announced publicly.

Since the late ’90s, pundits have asked when Amazon — the company Mr. Bezos founded on the premise that people would rather shop from the comfort of their screens — would finally start building stores. But Amazon executives saw plenty of opportunities in online retail and new ways to reach people, from creating digital book-selling devices like Kindle to building up the Prime membership service for getting faster deliveries and other benefits.

In 2012, Mr. Bezos told the television interviewer Charlie Rose that shoppers were already well served by existing retailers and that Amazon had no interest in a me-too effort.

Despite Amazon’s internet retailing success, over time it has become clear that there is a lot of shopping that people prefer to do in person. The most glaring example is groceries — the mother of all shopping categories, with about $770 billion for the supermarkets represented by the Food Marketing Institute, a nonprofit group that includes the majority of such stores in the United States.

After pouring resources into an online grocery service, AmazonFresh, for almost a decade, the company has made only modest progress. According to people familiar with the workings of the company’s grocery business, it has struggled to operate it profitably, leading to a slow rollout of the service in new locations.

One big desire many customers have is that they want to see fresh
fruits, vegetables and meat in person before buying them. The relatively
high cost of home delivery — Amazon charges $15 a month for its Fresh
service, on top of a $99 annual Prime membership — is another barrier.

Online grocery delivery accounts for only about 3 percent of the market
in the United States, though it is closer to 10 percent in Britain, said
Randy Burt, a partner in the food and beverage practice of A. T.
Kearney, a strategy and management consulting firm. Mr. Burt said
Amazon’s growing interest in stores mirrored the conclusion that other
online merchants with physical stores — the apparel seller Bonobos and
the eyewear seller Warby Parker — had come to.

Joe Thompson, a former general manager in Amazon’s retail business, sees
physical retail as key to Mr. Bezos’s outsize ambitions for the
company. “I can’t help but feel that, in Bezos’s mind, he wants to be
the first trillion-dollar valuation company,” said Mr. Thompson, who is
now an executive at BuildDirect, an online home improvement store. To do
that, he said, Amazon would have to “crack” a couple of “completely
underpenetrated markets online.”

In the coming weeks, Amazon is expected to open its first two grocery pickup stores, in Seattle’s Ballard and SoDo neighborhoods, which will allow customers to order food online and schedule brief windows for picking them up in person. Recently, as cars ripped by, workers hung a sign on the exterior of one of the stores — to be called AmazonFresh Pickup, according to city permit documents obtained by GeekWire — before quickly covering it up.

A growing number of established grocery retailers are experimenting with this “click and collect” approach to shopping, including Walmart, Kroger and others. According to one person briefed on Amazon’s plans, the company has been developing technology for automatically detecting when a customer pulls into the parking lot so orders can be brought to them more quickly.

A few miles away from its other Seattle stores, on the ground floor of one of its many office towers in the city, the company is testing Amazon Go, a convenience store concept stocked with beverages, sandwiches and prepared meals, which are put together by chefs in a kitchen that is visible from the street.

The retail industry has been captivated by Amazon Go’s technology since the company unveiled the store late last year. The store uses a combination of sensors and artificial intelligence to automatically detect the food items shoppers remove from shelves, so they can leave the store without visiting a cashier — the way customers do when they bolt from an Uber.

There have been glitches with the technology that Amazon engineers
continue to work on, according to a person familiar with the operations.
For now, only Amazon employees are allowed to use the store. Amazon
previously said it would open Amazon Go to the public in early 2017.

If Amazon is successful at automating the checkout process, the long-term implications for employment could be far-reaching because other retailers would probably do everything possible to copy it. More than 3.4 million people are employed as cashiers in the United States, according to the Bureau of Labor Statistics.

For months, reports have circulated that Amazon was considering a concept for a larger grocery store that would combine shopping formats like traditional walk-in purchases, click-and-collect and home delivery. One of those articles, a February piece by The New York Post, described a futuristic Amazon grocery store staffed by robots, requiring only three human workers.

That was too much, apparently, for Mr. Bezos, who became
uncharacteristically feisty on Twitter, attacking the article by saying
The Post’s sources had “mixed up their meds.”

But a group within Amazon has explored another larger grocery store
format, according to both a person familiar with the concept and to
internal Amazon documents reviewed by The New York Times. The store
could stock fresh produce, meats and other items in a public area of the
store, while keeping frozen foods, cereals and other items
traditionally found in the center of a grocery store behind a wall, in
what would be a kind of small Amazon warehouse. Workers behind the wall,
not robots, could quickly package orders for customers.

The idea resembles a concept laid out in a paper, “A Beautiful Way to Save Woolworths,” written by the retail industry consultant Brittain Ladd, who was later hired by Amazon. The status of that project at Amazon is unclear: One person said it never advanced far and was effectively dead, and another disputed that characterization.

While Mr. Bezos was known for coining the motto “Get Big Fast” in the early days of Amazon, the company’s plans in physical retail could be better described as “Get Big Slow.” Some reports have said Amazon has discussed building up to 2,000 grocery stores. But that figure was floated mainly as a hypothetical to consider the impact on Amazon’s supply chain, not as a goal that was under serious consideration, a person familiar with the discussions said.

In addition to the two soon to open in Seattle, as many as five more AmazonFresh Pickup locations could open by next year, and the company hopes to expand Amazon Go to Britain and several cities in the United States in the same time frame, this person said.

India could represent another big market for Amazon in physical retail. The company, which has vowed to spend billions of dollars on its efforts in the world’s second-most populous country, recently sought approval from the Indian government to open online and physical food stores in the country, The Economic Times reported in February.

According to a person familiar with Amazon’s India grocery efforts, the company hopes to open its first Indian grocery store in Bangalore. In a statement, Amazon said the company was excited by the Indian government’s efforts to encourage foreign investment in a “stronger food supply chain.”

For Mr. Galloway at N.Y.U., the slow pace of Amazon’s rollout of stores
is a sign that it has not figured out physical retail yet, and that has
surprised him. Five years ago, he believed Amazon would have hundreds of
stores by this time.

Bebe Plans to Shut Its Stores and Focus on Web Sales