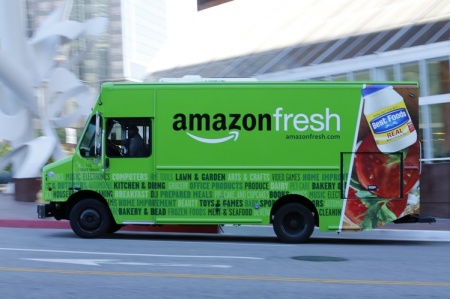 Amazon is planning to operate a 20-location pilot program for its grocery stores by the end of 2018, in places like Seattle, Las Vegas, New York, Miami, and the Bay Area, according to documents viewed by Business Insider.

The company wants to experiment with different versions of stores during the pilot program. Ten of the grocery stores will be “click-and-collect” drive-up spots for Amazon customers to pick up their online orders. The other 10 will be traditional stores where cart-pushing shoppers can stroll the aisles while touching, smelling, and inspecting produce and other goods for themselves.

The documents draw the curtain back on Amazon’s vision for the grocery stores, though the company could change course depending on business and market conditions.

Physical stores are becoming increasingly central to Amazon‘s business ambitions as the company expands beyond its online-retailing stronghold and looks for new ways to reach customers. Besides groceries, Amazon has already opened a few physical bookstores and is building out a network of pop-up stores in malls to showcase its line of hardware products.

The physical store strategy is expensive and will pit Amazon against far more experienced players, such as Walmart, which has more than 5,000 stores in the US.

As Amazon has moved into the massive $800 billion grocery market, it has until now taken a measured approach. Its grocery-delivery service, Amazon Fresh, has been unusually slow to expand, rolling out in only 17 US cities and one overseas location (London) nearly a decade after its first launch in 2007. With the new stores, however, Amazon appears to be preparing for a more aggressive push into the market

Amazon has studied the physical grocery store market closely in recent years. An internal market research report from 2014 that was updated earlier this year focused not only on sales data from Amazon’s Fresh and Prime delivery services but on market data from competing grocery stores.

Amazon has wrestled with the important question of whether to open the grocery stores to the general public or limit them to members of its Prime Fresh club, who pay a $15 monthly fee to receive grocery deliveries at home. The question is cited in the “risks/concerns” section of the internal documents.

The grocery market is the single largest shopping category in the US, at $800 billion in spending last year, but it’s also a tricky one because of its notoriously thin profit margins and high operating costs. By going membership-only, Amazon can use the membership fees to offset the high operating costs of grocery stores.

On the other hand, eliminating the membership requirement could help the stores reach a broader set of customers and increase sales faster. A Wall Street Journal report earlier this month said the first grocery stores would be available only to members of the Fresh subscription service.

If the 20-store pilot program is successful, Amazon envisions opening as many as 2,000 “multifunction” stores across the US over the next 10 years. The total number of grocery stores has not been finalized and could change, but the documents refer to a proposed launch schedule of 200 stores a year, all supported by a new generation of distribution centers to replenish inventories.

It’s still unclear exactly what the new Amazon grocery stores will look like. Bloomberg describes the drive-through spots as “gas stations,” while The Wall Street Journal characterized the grocery stores as “convenience stores.”

Some of the internal documents viewed by Business Insider say the drive-through spots will be 10,000 square feet in size, while physical stores could go up to 30,000 square feet. New technology like license-plate scanning or in-store kiosks are also being considered, along with a new rapid drive-through pick-up option.

Some stores could be a combination of drive-through and walk-through as Amazon continues to iron out the format.

Amazon believes that some of its stores will offer enough of a draw to become “destination stores” that consumers are willing to drive across town or even out of town to shop at. An Amazon grocery store under construction in Washington state and spotted by GeekWire is located in Ballard, a 25-minute drive from downtown Seattle.

“The Bentley Studio” in London