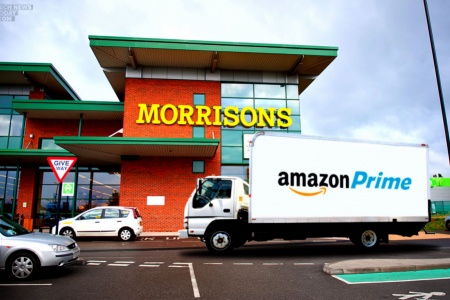 The British supermarket sector has been convulsed by fierce competition in recent years and analysts have warned that a step up from Amazon could hurt the traditional players even more.

In November Amazon launched a packaged groceries offer for Amazon Prime members, who pay an annual fee of £79.

That was its most ambitious foray into Britain’s growing online grocery market but it stopped short of replicating its broader US Amazon Fresh service, which offers about 20,000 chilled, frozen and perishable products and items from local shops. Retail analysts have speculated the US company was gearing up for a launch of Amazon Fresh in Britain this year.

“The combination of our fresh food expertise with Amazon’s online and logistics capabilities is compelling,” said Morrisons chief executive David Potts. “This is a low risk and capital light wholesale supply arrangement that demonstrates the opportunity we have to become a broader business. We look forward to working with Amazon to develop and grow this partnership over the coming months.”

The British grocer already has a supply deal with Ocado and on Monday it said it had reached agreement in principle with the online retailer to grow Morrisons.com.

The deal will result in Morrisons taking space in Ocado’s new distribution centre, or customer fulfilment centre (CFC), in Erith, south east London, and Ocado deliver a store pick solution for Morrisons that leverages its technology and the supermarket chain’s shops.

When implemented the deal would expand Morrisons’ online reach to the whole of the UK. The amended agreement is subject to detailed terms being agreed and will only proceed if it enables Morrisons to achieve profitable growth online.

Morrisons’ share price was up nearly 5% in early trading to 197p, the biggest riser on the stock market on Monday morning, following the announcement of the two online retail deals. Ocado was the biggest faller, however, shedding 6.5% to 263p.

Apple at 40: stronger than ever as trend-setter