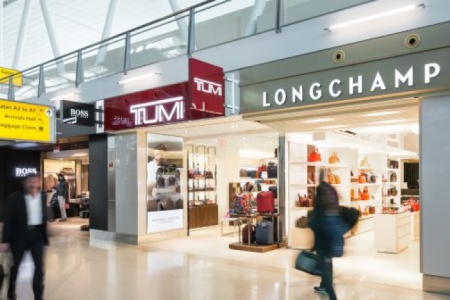 There may be opportunity in airport retail but it’s almost a sector unto
itself. Barriers to entry, frequently changing and finicky consumer
demands and a myriad of challenges in labor and operations can make
retailing in an airport drastically different.

Over the past few decades, airport retail has moved beyond kitschy
souvenirs and fast-food burger joints to full-blown shopping experiences
with upscale dining, spa services and luxury retail. No longer places
just to kill time, many airports are practically transforming some
terminals into shopping malls.

The airport retail market is expected to reach $90 billion by 2023, according to a recent report from Credence Research, and will experience “significant growth” as more middle class families from emerging countries take to the skies.

Credence also points to construction of new terminals in countries
like Brazil, Russia, India and China as an indicator of what’s to come.
The Asia Pacific region is the largest regional airport retail market,
accounting for 41 percent of all revenue share in 2015. North America is
also expected to witness significant growth with the rising sale of
duty-free luxury products.

Credence said fashion and accessories are the largest product
categories and account for more than half of all revenues in the global
airport retail market. Luxury brands and retailers are battling for
space and market share in airports around the world, showing growth in
every subsector from jewelry and apparel to upscale dining and services.

Companies like New York-headquartered XpresSpa
are expanding the luxury experience: It is the largest airport spa
luxury player in the world with 50 locations in North America, three in
Amsterdam and one in Dubai, and was recently acquired by FORM Holdings, a
diversified holding company that acquires and develops companies with
strong growth potential.

XpresSpa CEO Ed Jankowski says a growing number of business travelers
and travelers from emerging economies have “redefined” airports, and
that there has been a significant rise in requests for proposals
spelling out “luxury” in their requirements over the past two years.

FORM Holdings CEO Andrew Perlman says while retail overall has a low
growth rate, there’s “significant upside and growth potential” in
airports, much of it coming from international travelers. A Chinese
business traveler at John F. Kennedy International Airport in New York
City waiting on a flight to Beijing can now enjoy fine dining, shop for
luxury apparel and get a massage.

XpresSpa offers massages, manicures, pedicures, waxing, haircuts and
even hot showers. Jankowski says it offers travelers an opportunity to
get some luxury “me time” in the confines of the airport; the company
derives 20 percent of revenue through retail categories like neck
pillows, blankets and massagers.

Flyers are growing more interested in luxury brands and are more willing to spend money on them. Verdict Retail’s Airport Retail Survey and Luxury Trends 2016-2017
report found that the most-preferred clothing and footwear brands to be
purchased from airport retail stores in 2016 and 2017 will be Hugo Boss
and Ralph Lauren/Polo.

Francis Gros, head of global channels for Italian sunglass maker
Luxottica, said at the ACI Europe Airport Commercial and Retail
Conference and Exhibition in April that airport stores are well-suited
for its upscale brands. Gros said that of the company’s 3,000 stores
worldwide, its 155 airport locations are some of the best performing.
Luxottica opened nine new airport stores in Spain last year and recently
opened one in Dubai.

Retailers and brands are striving to meet the growing demands for the
luxury experience. Gerry Savaria, executive vice president at Paradies Lagardère Travel Retail, says there is also a growing push to cater to the elite, or so-called “1 percent.”

A growing demographic of people with high incomes still fly on
commercial flights; with money to spend and confinement in secure areas
for hours at a time, those consumers are a lucrative market looking for
unique products. And they’re often more interested in exclusivity than
price.

Savaria says a Chinese national passed through one of his company’s
stores at Charles de Gaulle Airport in Paris and spent $150,000 on
Domaine de la Romanée-Conti wine. While this doesn’t happen every day,
he says large purchases are “not uncommon.”

Teresa Curl, CEO of Avila Retail,
a specialty retailer with seven store brands in terminals in the
Southwest, says many of these high-income shoppers are also very busy
and don’t have much time to shop while at home. Avila, which sells
luxury Indian jewelry, even has “regular customers” who intentionally
save shopping for when they’re passing through the airport.

She says because the company does such volume, it even has a deeper
and wider stock of Indian jewelry than other places. “We actually have
people that live in Santa Fe and Los Alamos [N.M.] and will only buy
their jewelry from us when traveling,” Curl says.

Luxury retail is especially booming in airport markets that have
direct international arrivals and departures, especially with China.
Jankowski says Terminal 4 at JFK Airport is a prime example of a luxury
experience, with a wide range of chic, upscale boutiques and brands such
as Michael Kors, Hugo Boss, Coach, Guess, Tumi and Victoria’s Secret.
The airport is even constructing a $48 million luxury terminal for pets.

XpresSpa has four locations at the terminal and is preparing to open a
fifth. Jankowski says the robust growth in luxury services and retail
is offering the ability to organically grow in terminals that they’re
already in.

Airport retail can present significant challenges, the biggest which
can be simply securing a location. Due to the fact that airports are run
by quasi-government institutions, there’s a complex and competitive
bidding process that can take years of planning and require more capital
investments than a comparably sized store outside of an airport.

Even most large retailers and big brands are unable to successfully
do so themselves and contract third parties to secure and manage their
operations. Savaria says there’s a strong business-to-business component
in operating in airports that most retailers aren’t familiar with.

In 2015, after years of trying to win the process, 7-Eleven joined
forces with Paradies Lagardère to open post-security airport stores in
Dallas/Fort Worth International Airport.

The physical challenges go beyond simply securing a location: Curl says
many airports require retailers to completely tear down and rebuild
stores at the end of every contract. Because every contract is required
to go to public bid, retailers must formally vacate the space during the
end of their contract and re-bid on it. Avila is currently rebuilding
four of its stores in the Phoenix airport, a process that must be
repeated every seven years. Curl says it can add a significant layer of
complexity and cost.

From demographics and the way customers move about a store to
pricing, layout and optimizing the use of labor, retailing in an airport
can be drastically different than in a stand-alone store.

Alan Gluck, chairman of Airport Economic and Concession Consultants, says airport retailers have annual operating hours that can be nearly double that of a similar store outside of an airport.

Many stores are open every single day of the year, seven days per
week, from as early as 4 a.m. to as late as 11 p.m. Employees, and
product, must also pass through security every day. Lines, schedules and
airport traffic can also impact store traffic and shopping patterns.
Some customers may blaze through a store with only minutes to spare;
others may be wandering around the airport for hours with little to do.

The labor challenges can mount, Gluck says. Because airports aren’t
always easy to get to, and because of the cost of parking, retailers
have to work harder to recruit employers. Workers also have to go
through a vetting process and extensive background checks. Gluck says
the competition for workers can be so stiff that some retailers attempt
to recruit other retailers’ workers with incentives like higher pay.

Another challenge is that third-party store operators put a
“middleman” between the brand, consumer and airport. Savaria says
retailers must strive to ensure their brand is properly positioned and
presented in the right fashion, as it can get “broken down” through the
layers. And while consumers may roam and shop about the airport freely,
airlines, their schedules and gates can ultimately impact how a brand is
perceived by the consumer.

Airport stores can also have significantly different footprints and
layouts. Gluck says most don’t go deeper than 30 feet as passengers tend
not to walk too far into stores for fear they’ll miss an announcement.
Shoppers can also have drastically different motivations: Unlike a mall
where consumers visit with the intention of shopping, people go to
airports to travel.

Gluck says travelers can rapidly change their intentions, calling it a
“bell curve of stress” as they move through the airport. Passenger
stress levels usually grow as they move through ticketing, then “drop
like a cliff” once they find their holding area. The crowds, length and
speed of the lines can all have an impact on the shopper experience and
bottom line.

With small footprints, high sales per square foot and high growth
rates, airports are still prime for retail growth. Many airport
retailers have also yet to fully tap the potential of the mobile and
omnichannel experience for passengers.

Savaria says while many retailers are investing in the technology and
“moving in that direction,” mobile in airport retail is “still in its
infancy” because most shopping is done on impulse. Shopping patterns and
the propensity to buy can even be influenced by the purpose of the
trip, whether the passenger is coming or going and even the carry-on
limits of the airline they’re flying.

Retailers are also taking advantage of walk-through duty-free
shopping in arrival halls where consumers are funneled through stores on
the way out. Gluck says while such placement is barred in the United
States, it’s a growing opportunity because it reduces the need for
consumers to carry these items on the plane. As consumers may be limited
by what they can (or want to) carry, some retailers could benefit by
increasing shipping options as well.

While it may be challenging for retailers to pin down changing demand
in this environment, mobile could offer a platform to expand the
airport retail experience. Gluck says one emerging trend is consumers
using apps to order food or retail goods, then have the items delivered
to them in hold rooms.

Grab, an app already on the market, allows passengers to order food
in advance and pick it up at a designated time. Gluck says while these
concepts haven’t yet fully taken hold, there is a “huge opportunity to
grow business without adding space or employees” that is bound to take
off in the coming years as a means to grow
store revenues.

Jankowski says XpresSpa is making mobile and omnichannel
functionality a priority for 2017. The plan is that customers who are in
one airport and traveling to another will be able to book a service
through the app.

Why Zara Is The Most Exciting Retailer Today