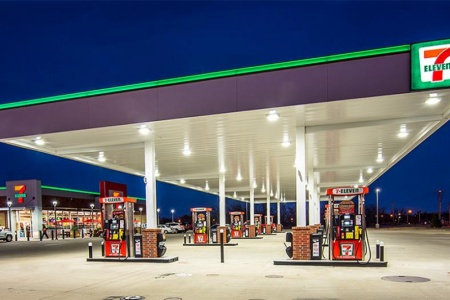 For 7-Eleven, Big Gulps and Slurpees are no longer enough.

The convenience-store pioneer is falling behind rivals that are gleaning more sales from healthier snacks and freshly cooked meals.

The 155,000 convenience stores in the U.S. sold $53.3 billion worth of prepared food and drinks, like hot dogs and slushies, last year, a 31% increase from four years ago, according to the National Association of Convenience Stores. Over that stretch, 7-Eleven said its sales of those items rose 20%.

The company’s executives said they are working to come up with better foods to sell in their 9,700 North American stores.

“Simply being open longer than the competitor … is not enough,” said Raj Kapoor, referring to the stores’ extended hours. Mr. Kapoor, a 23-year veteran of 7-Eleven, is head of fresh food and proprietary beverages.

Some 7-Eleven stores are selling freshly made chicken wraps and cold-pressed juices, and some have tested delivery by drone.

Chief Merchandising Officer Jesus Delgado-Jenkins said 7-Eleven wants to introduce home delivery of goods, from deodorant and batteries to sandwiches, in more cities. The company, which is competing with Amazon.com Inc. and others for home delivery, says half of the people in the U.S. live within a mile of one of its red-and-green signs.

“In the next two years, we are going to make getting something delivered within minutes a reality,” Mr. Delgado-Jenkins said. He said 7-Eleven is investing heavily in delivery, though he didn’t say how much.

The effort to freshen up 7-Eleven’s business has run into resistance from the chain’s franchisees. Eight out of 10 7-Eleven stores are owned by franchisees, most of whom own fewer than five stores. Many say it is too expensive to maintain new equipment like ovens, and that 7-Eleven needs to pay to remodel their stores if they want them to sell more fresh and hot food.

The National Coalition of Associations of 7-Eleven Franchisees, an umbrella group representing store owners across the country, alleged in a lawsuit last year that 7-Eleven had increased their costs, hurt their profitability and made unfair demands for them to buy food from the parent company that eroded their status as independent contractors. Dozens of franchisees boycotted the company’s corporate convention in Las Vegas in February.

7-Eleven, meanwhile, is suing the coalition for trademark infringement, arguing it has improperly used the company’s logo for promotional material such as the group’s website.

A judge dismissed the coalition’s suit against 7-Eleven and ordered both sides to reach an agreement on the claims. A lawyer for the coalition said they plan to appeal. The trademark case is pending.

A 7-Eleven spokeswoman said its annual corporate convention attracted thousands of franchisees from across the country, and that the company is committed to helping independent owners increase their profitability.

Mr. Kapoor said 7-Eleven franchisees understand that the brand needs to evolve. He said 7-Eleven has local bakeries and commissaries that make food fresh daily for its stores and is testing ways to finish partially cooked food at its stores, but doesn’t plan to install full kitchens. In St. Louis, 7-Eleven customers can order chicken wings doused in one of four sauces. In many stores, they can customize hot dogs, tater tots and nachos with toppings, such as cheese and jalapeños, at the condiment bar.

7-Eleven traces its roots to an ice store in Dallas in 1927 that started selling customers milk and eggs along with ice. At the time, ice stores were open when many other retailers weren’t, including on Sundays. In the 1940s, the company took the 7-Eleven name to reflect hours of operation that were unprecedented at the time.

7-Eleven is now owned by Japanese holding company Seven & I Holdings Co. , which has 65,000 stores globally.

In recent years, 7-Eleven has been slow to add healthier, fresher foods as sales of longtime staples such as soda began to fall, industry analysts said. Sales of cigarettes, chocolate bars and soda at all U.S. convenience stores fell over the past two years, Nielsen said, while sandwich and salad sales grew by double-digit percentages.

7-Eleven says it has been addressing the shift in tastes for several years. But competitors have done more to sell fresh—and more profitable—foods, analysts said.

At 7-Eleven in downtown Chicago, Wilson Mejia, a 32-year-old accounting clerk who buys food from 7-Eleven several times a week, said he would appreciate more variety such as breakfast sandwiches with more toppings.

Other customers at the store were skeptical 7-Eleven could change.

“Can convenience store food ever be good?” asked John Adams, a 38-year-old data scientist, as he bought an energy drink but planned to eat lunch elsewhere.

Macy's looks to make shopping an experience with Story

Nestle to pay $7.15 billion to Starbucks in coffee tie-up