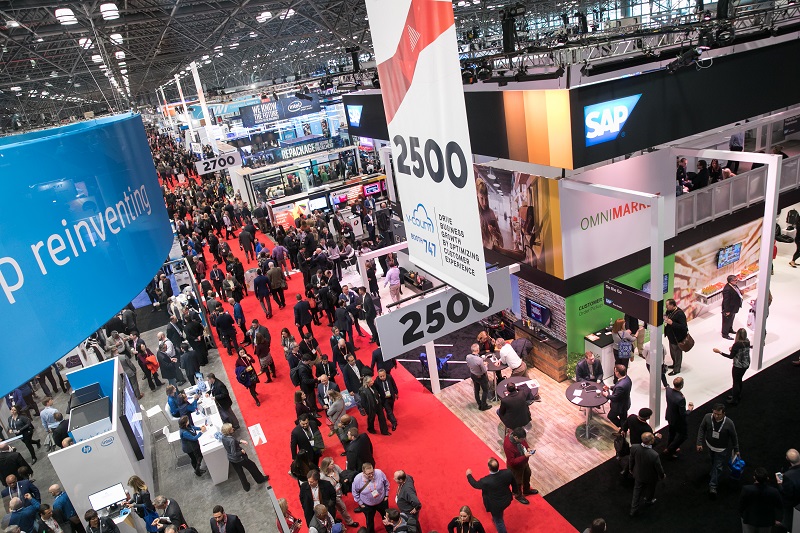 Tech to compete against a disruptive  Amazon.com will continue to be central to retailers’ strategy in 2019. But it isn’t the only thing that will appear on retailers’ tech shopping list.

While you can expect to see more holographic 3D images at malls and stores to wow you, these six trends that were evident at the National Retail Federation’s annual “Retail’s Big Show” last week will have a more lasting impact.

1 – More cloud-connected machines, part of the buzzed-about internet of things, are coming to stores.

As Starbucks baristas gave out free samples at a makeshift coffee station inside a Microsoft booth, screens behind them displayed data like how many cups the machines had brewed. This arrangement was no coincidence: Starbucks has teamed up with Microsoft to connect its coffee and other machines to the cloud via Microsoft’s Azure Sphere IoT system.

Why is this initiative relevant? When Starbucks introduces a drink recipe, for instance, it will now be able to remotely update all of its connected devices, a faster alternative to manually delivering a USB drive to be inserted into the machine before a barista can make that new espresso drink, a Microsoft spokesperson said at the booth. Starbucks can also instantly track and aggregate sales and other data and see what’s popular with consumers when and where.

Starbucks said the move will give its employees more opportunities to engage with customers and can help with “beverage consistency, waste reduction, the management of energy consumption and predictive maintenance.”

“Starbucks has somewhere from 15 to 20 pieces of equipment in our stores,” Jeff Wile, a Starbucks senior vice president, said in a presentation at the trade show. “Every one of those [pieces of] equipment has to be managed and monitored and serviced. … If I can minimize just one maintenance effort a year and [cut] one time when a guy has to show up and service that machine, it pays for itself. And I’m getting all the data. If I can go to the internet and push that [new] recipe, we can be faster and innovate faster.”

Wile acknowledged that Starbucks had been late and didn’t start its “migration to the cloud” until about three years ago. But it has been working with its Seattle neighbor closely to change that, with Microsoft embedding its engineers to help Starbucks with the transition, he said.

“What we are seeing [with the retail industry] is the pace of transformation through the cloud,” Greg Jones, Microsoft’s head of business strategy for worldwide retail, said in an interview. Retailers “ask us to transform their business operation and co-create. The mentality has changed about customer experience in stores.”

2 – Yes, Amazon Go is about to change the way we shop.

Amazon Go has received generally very positive consumer feedback, as detailed in this recent article, forcing the rest of the industry to play catchup. The Intel booth, for instance, showcased a cashierless store concept and a smart vending machine the chip giant developed with China’s e-commerce retailer JD.com for that market. A JD.com spokesperson said the company traveled to the show with the intention of exploring licensing its cashierless technology to retailers in the U.S. and elsewhere.

“We got traction after Amazon Go,” said Krishna Motukuri, CEO and cofounder of Zippin, which in August opened a 150-square-foot Amazon Go-like test store in San Francisco, where Amazon has two Go locations.

“Checkout-free shopping has arrived. We realized there’s a huge opportunity,” he said.

With Amazon’s 100,000-plus robotic drive units a big part of its fulfillment-center secret sauce, rivals are eager to employ their own robots to help fulfill online orders faster.

Tompkins Robotics, for example, has introduced its own t-Sort robotic drive units, which can sort individual items to help retailers cut the order processing time. Four of the top 15 U.S. retailers are its customers, Tompkins Robotics president Mike Futch said, declining to specify which ones. Some of its retail customers are looking at deploying those robotic devices in the backrooms of their supercenters to fulfill same-day or next-day delivery orders from stores.

“We are growing tremendously,” Futch said. “Some retailers have decades-old technology on a fixed-track big loop.”

To be sure, Tompkins’ robotic unit is different from Amazon’s, which has the ability to move and navigate an entire shelf of a mishmash of products.

This year, retailers will continue to seek to use technology to free store employees from menial tasks so they can spend time servicing customers instead. Retailers also want to use tech to help track what’s missing and misplaced on shelves and better keep inventory in stock. At the Intel booth, for instance, Pensa Systems showcased drones that track store-shelf inventory for customers including beverage giant AB InBev.

“The retail shelf is like a black hole,” Pensa Systems president and CEO Richard Schwartz said. “There is no automation knowing what is on the shelve. We are trying to change that.”

Meanwhile, the supermarket chain Giant Food Stores this year will deploy a “googly-eyed” robot, which it named Marty, to all 172 of its stores after a successful pilot that had Marty inspect its floors to make sure there were no “hazards” like spills.

“We want to free people to focus on customer engagement,” Nicholas Bertram, the chain’s president, said at an NRF talk. “This is the largest deployment of robotics in supermarkets.”

With increased online spending, delivering on experience when shoppers actually visit a brick-and-mortar store is more crucial than ever. Just ask Stacey Shulman, the Intel retail solutions unit’s chief innovation officer. The question she told me she gets most from Intel’s retail customers? “What keeps my physical store relevant?”

5- Retailers will make the cost of returns less painful.

What’s at stake isn’t just the cost and time returns take. For the fashion industry, the ability to turn around a return and resell the item while it’s still in season could reduce the clearance risk later. And with more brands selling internationally, there’s the opportunity to sell a returned Topshop swimsuit in the winter in Europe by bulk shipping it with other items for sale to Topshop customers in Australia, for instance.

“The challenge for retailers is around fashion cycles,” Eve said. “You have a window of opportunity to get [returned] goods back to shelves.”

B-Stock, a liquidation marketplace platform for retailers including Amazon and Walmart, said in December that one out of every three people would return a holiday gift, translating to what it estimated would be $90 billion to $95 billion worth of returns after the holidays.

6- Your local store shelves are getting digital, and it’s not just about cutting paper tag costs.

While more retailers are looking to turn their shelves digital to save time and the paper-tag costs of traditional price-promotion updates, Kroger is working with Microsoft to give its digital shelves more bells and whistles. At two Kroger test stores, the shelves will connect with Kroger’s scan-and-go shopping app to guide customers through their shopping lists. They can also flash lights to give employees visual cues to help them pick and fulfill curbside delivery orders quickly. And Kroger plans to turn its shelves into digital advertising space for CPG brands.

Kroger, through its own Sunrise Technology unit, has said it is seeking to license its in-house built digital shelf and other technologies even to rival retailers.

“We want to commercialize the retail world,” Peter Thelen, president of Kroger’s Sunrise Technologies, said in an interview. Thelen’s group is creating an “automated platform to buy ad space on our shelves and working with CPG companies to reallocate their ad spending and help convert in-store spend with data.”

With Amazon—and fickle consumers—keeping retailers on their toes, thinking outside the box for new growth opportunities will be the new industry norm.