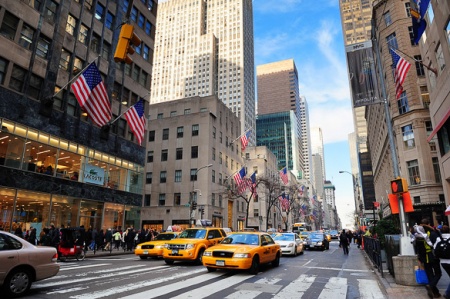 For some years now, fashion has been speeding up. It’s evident in the non-stop runway schedule, the constant influx of new clothes into stores, and the glut of images we see of it online and in print. But this year, fashion’s frenzied pace reached a new pitch.

One of the most telling moments was when Raf Simons, who had expressed frustration with the industry’s acceleration, stepped down from his role as creative director of Dior, one of the industry’s most coveted and prestigious jobs. But speed isn’t just straining the creative energies of designers; it’s also changing the way fashion works by forcing brands to deliver more products more quickly, and even rethink their business models entirely.
“In 2015 Net-a-Porter grew the number of new products arriving online by 14%, Saks Fifth Avenue by 13%, Farfetch by 11%, and Nordstrom by 7%,” Katie Smith, senior fashion and retail analyst at retail technology company EDITED, tells Quartz. Those figures are skewed slightly by retailers adding new brands, but the number of products within brands is also increasing in many instances. EDITED calculates, for instance, that Net-a-Porter increased stock on 9 of its top ten brands. Fashion is entertainment, part of the endless stream of media delivered through our smartphones.

The newly quick turnover isn’t restricted to luxury labels. As sales fall at Gap and Banana Republic stores, owner Gap Inc. announced earlier this year that it’s going to test a fast-fashion model to deliver smaller batches of goods more frequently. Spanish retailer Mango announced a similar plan to focus on “speed and immediacy,” and Adidas recently opened an extra-fast “Speedfactory.”
The speed these brands want to develop is what helped make Zara the world’s biggest fashion retailer, and led investment firm Bernstein to single out Inditex, Zara’s parent company, as having “the best business model in apparel.”

The message to other fashion brands: catch up or risk obsolescence.

Emily Gordon-Smith, head of fashion at research firm Stylus and a 20-year industry veteran, calls it a “post-digital phenomenon”.
“Obviously manufacturing has sped up, but it’s about the information flow,” she explains to Quartz. “People want the product now, and they want it as it’s happening, so lead times in stores have become massively reduced.”

The way people shop has changed—customers expect a near constant stream of products to their stores, or lose interest. Shoppers are increasingly Millennials, who became the largest generation in the US labor force this year and are poised to become the biggest buyers of luxury products in the next few years.
For this new fashion customer, fashion is entertainment, part of the endless stream of media delivered through our smartphones. “When we look at the world, we see fashion, sports, movies, TV, books: They are all just different aspects of global entertainment consumption,” Ariel Emanuel, an executive at WME/IMG, told the New York Times in September. Emanuel should know; WME/IMG is a sports and entertainment giant that also happens to own, operate, or represent 13 different global fashion events, including “Fashion Week” in Milan, London, and New York.

This demand for immediacy is most pronounced on social media, where fashion brands connect with millions of customers in real-time. This year saw Facebook, Pinterest, and Instagram testing “buy” buttons that offer an even more immediate way to buy from the media stream.
All those images correspond to actual products, and now brands are struggling to close the gap between when they post a picture and when they deliver the real thing. “People will see a look on the runway and expect to buy it a few weeks later,” Instagram co-founder Kevin Systrom told Vogue France in March. “Houses like Chanel have told us they are having trouble, because there is such a small gap between getting it out there and massive consumer exposure.”

New York-based brand Thakoon recently said that it would change its business model to what it calls “real-time fashion,” an approach described by Business of Fashion as “see-now, buy-now, wear-now.” The goal is to create “digital immediacy,” and another label, Rebecca Minkoff, followed with a similar announcement shortly after.
In this context, it’s not surprising that digital became a top priority in the luxury industry this year. To manage its online efforts, LVMH, parent company of Louis Vuitton, went so far as to poach a top executive from Apple.
Of course, simply delivering more products doesn’t guarantee success—a brand also has to make sure its offering works in terms of styles and prices. But the fashion industry is clearly doing everything it can to speed up operations as it joins the racing global media complex. And with every runway look and every garment just a click away on a smartphone, there’s no reason to believe we’ll slow down again any time soon.

“Fashion has changed, and it’s continuing to change because, fundamentally, people get bored quicker,” as Jonathan Anderson, the wunderkind of British fashion, told WWD after taking over at LVMH-owned Loewe last year. “When you see it, you want to buy it.”