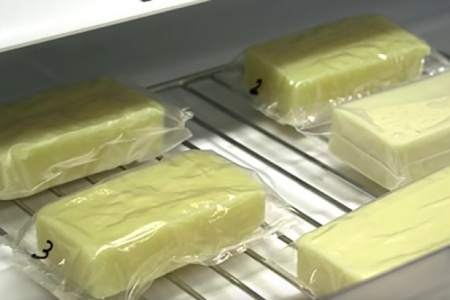 Brands might have a new option when it comes to environmental friendliness. A preliminary breakthrough in technology could find CPG manufacturers replacing non-biodegradable plastic packaging with material that can be eaten.

The U.S. Department of Agriculture has discovered how to develop a biodegradable, edible packaging film made from the milk protein, casein, Bloomberg reported. Researchers are eyeing the casein-based film, which is more airtight that plastic, as a potential replacement for the wrappers for packaged cheese, single-serving cheese sticks, soups, coffee and other food products packed in thin, difficult-to-recycle plastic wrap. The technology is more promising than, for instance, potato starch-based packing peanuts.

The potential for single-serving packaging that dissolves quickly could offer a fix for at least one popular but environmentally questionable innovation, the Keurig machine. Keurig machines and their single-serving K-Cups are considered a scourge by environmentalists due to the amount of waste they generate. K-Cup inventor John Sylvan went as far as to say that he sometimes feels bad for having invented the machine in an interview with The Atlantic.

There may be limits to how much packaging consumers would eat and regulators would allow. It is hard to imagine mainstream customers going in for edible external packaging, like a cereal box. On the other hand, it’s possible that food scientists could someday flavor packaging in a way that complemented the product within.

Whatever form it eventually takes, edible packaging could help retailers get closer to the goal of generating zero waste. Grocery stores have approached the zero waste equation from different angles. Some chains have started selling rather than tossing “ugly” vegetables, encouraging customers to bring their own grocery bags and have attempted to reduce unnecessary packaging. Some smaller stores have gone farther, attempting to adopt fully packaging-free models.

But the get off the ground, edible packaging film will need support from brands. The technology could end up sitting in the lab, rather than on the shelf keeping food fresh, unless companies step in and find their own applications for the edible film, as was the sentiment of one researcher quoted by Bloomberg.

Michio Kaku on ‚Äúperfect capitalism‚Äù and the future of commerce